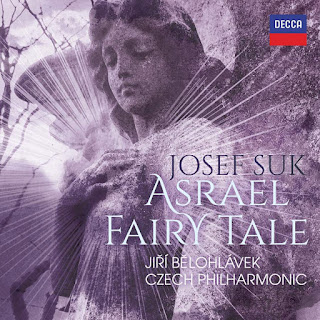 This recording appears in a Decca series entitled Bělohlávek The Last Recordings, made in the years 2012–2017, his second stint as Chief Conductor of the Czech Philharmonic. The recordings were unreleased at the time of his death, and are now trickling out. They are proving a fitting coda to an impressive recording career, with Má Vlast, the Glagolitic Mass, and the Dvořák Stabat Mater all well received. As with the Dvořák, Suk’s Asrael is a fitting work for posthumous release, its subject the Angel of Death in the Old Testament and in Islamic tradition. Naturally, then, it is a serious work, but it’s not all doom and gloom, and Bělohlávek brings a valuable lightness of touch to the score, marshalling the imposing and disciplined forces of the Czech Philharmonic, the results impressively dramatic, but dynamic and nimble too, in a way that not all the competition can match.
That said, the competition is certainly impressive. Many of the top names in Czech music are represented in the work’s current discography: Ančerl, Mackerras, Pešek, Neumann (plus Talich nla). Other interesting contenders include Kirill Petrenko on CPO (555009), one of only two commercial recordings the conductor had made when he was named to succeed Rattle at the Berlin Philharmonic. The work’s imaginative orchestration benefits from high-resolution audio, so it is good to see two SACD releases, from Ashkenazy on Ondine and Claus Peter Flor on BIS, the audio standards on the BIS release particularly impressive. This new version is Bělohlávek’s third commercial recording and at least the third from the Czech Philharmonic as well, so there is plenty of experience behind the interpretation.
Curiously, the differences between all these readings are slight. Suk gives no metronome markings, yet most recordings come in at within two minutes of the 60-minute mark (this one 58:48), and even the usually brisk Petrenko is in the middle of the pack. But what distinguishes the superior readings, and Bělohlávek’s latest in particular, is the dynamism that keeps the weighty textures from grinding down the work’s symphonic flow. The symphony is eccentrically structured (this is the first recording I’ve seen that doesn’t acknowledge Suk’s grouping of the five movements into two parts), and the conductor must pull through many tersely orchestrated passages towards long-term goals and climaxes that are not always immediately clear. That’s where Bělohlávek’s experience with the score pays off, his reading confident and focused, but with a lightness and grace that make Suk’s often eccentric harmonic progressions and instrumental combinations seem intuitive and logical.
Naturally, the Czech Philharmonic has a keen sensitivity to the style of this music, and particularly the Dvořák-like folk influences sublimated beneath the symphonic fabric. But the sheer quality of the orchestral playing also deserves comment. The strings have elegance and character, the woodwinds warmth, and the lower brass impressive weight and clarity. On the technical front, the sound is immediate and arresting, with the orchestra sounding close, but with the space of the Rudolfinum acknowledged in satisfying, if low-key, decays, especially after the final chord of the scherzo Third Movement.
A short second disc is included, featuring Suk’s earlier Pohádka (Fairy Tale). It is an unnecessary addition, probably included for the sake of comprehensive coverage of Bělohlávek’s as-yet unreleased recordings. The work is based on incidental music, for Julius Zeyer’s play Radúz and Mahulena. The music is attractive and evocative, with even more folk influence than in the symphony. As with the symphony, the work is well-represented on disc, and a previous version from Bělohlávek and the Czech Philharmonic is currently available in an eight-disc Bělohlávek set from Supraphon (Recollection, Supraphon 4250). But the music is pleasant enough, and receives another excellent reading here, with particularly elegant solos from the orchestra’s leader, Jiří Vodička.