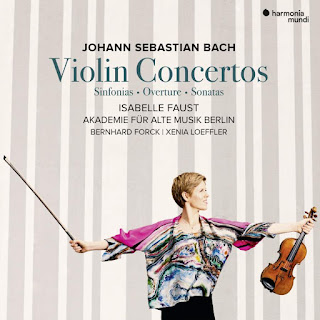 Isabelle Faust takes a generous approach to Bach’s violin concertos, and a surprisingly collaborative one too. The three concertos that survive in that form are supplemented with three that are reconstructed from keyboard concertos, plus, for good measure, a suite, two trio sonatas, and instrumental movements from three cantatas. The result is a well-filled twofer offering impressive musical variety, and with as much attention paid to the orchestra—the excellent Akademie für Alte Musik Berlin—as to Faust herself.
Even in the solo concertos, violin and orchestra are presented as equals, with Faust integrated into the orchestral textures. Everything has a warm, bottom heavy sound, a result both of the relatively large ensemble, with three cellos and two basses, and the rich recording ambience. The recordings were made at the Teldex Studio in Berlin, produced by the ever-dependable Martin Sauer. He is a stickler for sonic detail, and has no qualms about including players’ breathing in the final mix, or the rasp of bow hair engaging with strings, so you’ll hear plenty of extraneous noise. You’ll also hear details from within the ensemble that you never knew were there—a rare quality in a concerto recording.
Faust is a lively and imaginative soloist. Straight tone is no impediment for her to create warm and welcoming timbres. Her ornamentation is extensive and flowing, an integral part of the melodic lines more than decoration. Tempos are generally brisk, but Faust has an intuitive ability to gently relax the momentum by holding back on the last few notes of a phrase or run, each time creating an entirely new perspective on Bach’s allegro or vivace. The orchestra, led from the concertmaster chair by Bernhard Forck (also co-soloist in BWV 1043), is more disciplined with tempos, but displays an impressive sense of phrasing, with small but emphatic dynamic swells and subtly varied articulations in the strings.
As the album progresses, it becomes increasingly easy to forget this is a concerto recording at all. In the Trio Sonata, BWV 527, arrangement, for example, the oboe is given the top line over the violin. Oboe/recorder player Xenia Löffler excels here, as she does in Sinfonia from Cantata 21, Sonata from Cantata 182, and the Two Harpsichord Concerto, BWV 1060, here rendered/reconstructed as a double concerto for oboe and violin. A mention too for continuo keyboard player Raphael Alpermann, whose move from harpsichord to chamber organ for the Cantata 21 Sinfonia takes the orchestra’s sound in a satisfying liturgical direction.
Packaging, as ever from Harmonia Mundi, is colorful if a little obstructive: a three-way card gatefold, but with no track listing on the back, and the one inside obstructed by the liner booklet and omitting the final work. No information is given on who carried out the reconstructions and arrangements, and you’ll have to go into the liner essay itself, by Peter Wollny, to find out exactly what they were arranged from. All of which suggests a project designed more as an exploration of the musical potential of this expanded repertoire than an academic survey of its history. That is all to the best for an album that offers much to enjoy, not least the surprising variety of ensembles and genres from one work to the next. Isabelle Faust is on top form here, but the orchestra and its soloists deserve equal billing.