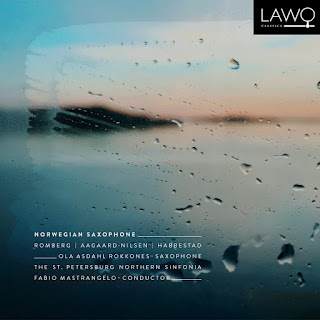 
This disc presents three Norwegian works for alto saxophone and orchestra, all dedicated to the soloist, Ola Asdahl Rokkones, who also had a hand in each of the commissions. None is described as a concerto, and although the Aagaard-Nilsen and Habbestad works are each in three movements, the title would seem inappropriate for music so unconcerned with virtuosic display. Perhaps that reflects an element of Rokkones’s own personality, a musical perspective that looks beyond the superficial to explore more subtle and complex layers in the music.
The three works are varied in style, but all are based on literary inspirations. Martin Romberg’s The Tale of Taliesen draws on Welsh mythology. It tells a complex story, which is paraphrased in the liner, but the music’s narrative quality is clearly evident without foreknowledge. Romberg’s style is well suited to such storytelling, tonal and illustrative throughout. So much so, in fact, that it often resembles film music, although all the story is in the notes. A common feature of all three works here is a light touch in the orchestral writing, and Romberg always emphasises colour over visceral impact in his use of the ensemble. The work opens with a wistful viola line, over which the soloist plays an elegant folk-infused melody, setting the mood for the music to come. Rokkones plays with a warm tone, but with a satisfying reedy edge and just the faintest hint of vibrato.
Bør, by Torstein Aagaard-Nilsen, is based on a contemporary poem of the same name by Stein Mehren. The word variously translates as ‘burden’, ‘rainfall’ and the verb ‘ought to’, and the poem itself is similarly abstract. Even so, Aagaard-Nilsen structures the music strictly to the text, the three movements linked to the poem’s three stanzas. The composer describes the work as ‘poetic music’, and relates it to the various evocations of light in the poem. He also describes it as an exploration of the saxophone itself, and these two interests result in a wide range of extended performance techniques to create colours and moods, especially multiphonics. The orchestra is again used with discretion, most often with quiet and inscrutable string sonorities gently supporting the soloist.
The final work, Un rêve norvégien by Kjell Habbestad, seems to continue the aesthetic of the Aagaard-Nilsen and take it even further. The literary source here is a medieval Norwegian ballad, Draamkvedet, considered a national epic there. The music draws moods rather than stories from the text, as the movement titles demonstrate: Dream, Bliss, Vision. This is mostly slow music, on an epic scale commensurate with the poetic source. It is another exploration of extended performance techniques on the saxophone, although the music also has a sophisticated modal structure, and the accompaniment, while again subdued, presents a wide range of instrumental colours, the woodwind chorales of the second movement particularly effective.
Ola Asdahl Rokkones has recently been doing much to promote the classical saxophone in Russia, and since the release of this disc, he has appeared as a soloist with the orchestra of the Mariinsky. The disc itself was also recorded in St. Petersburg, with another SPB orchestra, the St. Petersburg Northern Sinfonia under Fabio Mastrangelo, an Italian who is based in the city and who is rapidly becoming a figurehead of the musical establishment there. The orchestra is fully conversant with the varying styles of these three composers, bringing plenty of colour and energy to the Romberg, and imbuing the Aagaard-Nilsen and Habbestad with suitable mood and atmosphere, their control of the often quiet textures particularly impressive.
This album brings a new perspective to the classical saxophone, with delicate, warm and often subtly complex sounds. It also offers an intriguing portrait of soloist Ola Asdahl Rokkones, who is clearly intent on taking the instrument in a new and intriguing direction.