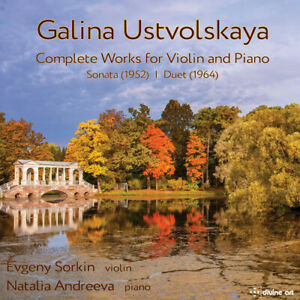 This release is entitled Galina Ustvolskaya: Complete Works for Violin and Piano, but that turns out to be just two works, both fairly early. Fortunately, they are both substantial—though this is still a short disc—and typical of her austere “desk drawer” style. The Violin Sonata dates from 1952 and the Duet for Violin and Piano from 1964. By 1952, Ustvolskaya was already writing music without much rhythm, or rather, as the liner notes describe, music in 1/4 where there are no weak beats, just a succession of equally stressed quarter notes. The Duet is more varied, its seven movements embracing more varied textures and tempos, and even if the overall mood remains somber, the musical language becomes more varied, with violin harmonics adding an icy sheen to the still insistent piano lines.
The recording project was initiated by pianist Natalia Andreeva, who recently released a two-disc set of Ustvolskaya’s solo piano works on the same label (251 30). Here, she is joined by fellow Russian and fellow Australia resident Evgeny Sorkin, the recording made in July 2018 at the Sydney Conservatorium of Music, where Andreeva teaches. The liner notes are by Andreeva herself and give an idiosyncratic picture of the composer, though an informed one—Andreeva’s Ph.D. thesis is on Ustvolskaya’s piano music. She discusses some textual issues (apparently the published editions vary from Ustvolskaya’s manuscripts, which Andreeva has consulted at the Paul Sacher Stiftung) before going on to some imaginative readings of the music itself. For Andreeva, the sonata speaks of the Stalinist terror and includes highly veiled allusions to chorales and church bells. The Duet is described as a dramatic dialogue between the two players, its “plot” traced by name ciphers so obscure that even Andreeva herself cannot identify them, although she adds that they are only of interest to the performers anyway.
Given this detailed exegesis, it is surprising how objective and dispassionate the readings are. The recording acoustic is very dry, which only adds to that sense of detachment. Fortunately, the approach feels very much in tune with Ustvolskaya’s uncompromising aesthetic. The performers rarely exaggerate the dynamic extremes—and there are plenty of dynamic extremes notated in the scores—and seem as concerned with maintaining tight ensemble and careful balances as with exploiting the music’s Expressionist drama. Sorkin plays with a controlled vibrato, which adds color, but without tipping the music over into overtly Romantic expression. And the fact that Andreeva is the guiding force behind the project is apparent from the amount of detail and commitment in the piano playing, to the extent that the piano often becomes the center of attention.
The two works here are available in several other recordings, all fairly recent. A 2017 release from Melodiya (99122) includes the sonata, played by Mikhail Waiman and Maria Karandashova, but is let down by a poorly tuned and dreadfully recorded piano. Also from 2017 (though apparently a remaster), a recording of the Duet by Vera Beths and Reinbert de Leeuw, offers atmosphere, intrigue, and menace. Similarly, the ECM version from 2014, with Patricia Kopatchinskaja and Markus Hinterhäuser, is a highly characterful and compelling account. In many ways, it is at the other end of the spectrum from Sorkin and Andreeva, with the violinist dominating, putting across a huge amount of personality, and all in a warm, enveloping ECM sound envelope. Sorkin and Andreeva give an account that needs a little more empathy from the listener, but which remains involving. We might argue that the more nuanced and underinflected playing here is more in the composer’s spirit, but Beths and de Leeuw would still be my first choice.