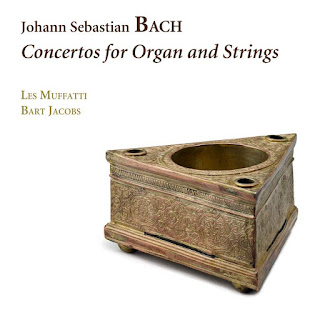 
This album presents an audacious reconstruction of Bach organ concertos with a tenuous, though credible, historical justification. In 1725, Bach gave a concert at the Sophienkircke in Dresden to demonstrate the new Silbermann organ there. According to a newspaper report, he performed “various concertos with sweet underlying music.” The following year, 1726, Bach composed several cantatas with organ obbligato movements, most of them reworkings of lost violin and oboe concertos. The premise here is that the concertos performed in Dresden were those violin and oboe concertos, arranged for organ, and that these were the organ concertos that were then reused in the cantatas.
Bert Jacobs, the organist as well as the editor of the reconstructions, concedes in his well-translated liner note that speculative decisions have been made at every turn. Even the organ obbligatos in the 1726 cantatas are only written on two staves, requiring a keen understanding of contemporary performance conventions to establish the relationship between the left hand and the pedals. Fortunately, an organ has been found that has impeccable Baroque credentials, the Thomas organ in Bornem in Belgium, modeled on Silbermann’s 1721–22 organ for the Marienkirche in Rötha. The one complication is that it is tuned to A=440, with a fairly tame modern temperament, but even so, its small palette of timbres gives plenty of Baroque flavor, especially from its woody diapasons. But it is a small organ, just two manuals, largely controlling the same small group of registers, and a pedalboard with two eight-foot and two 16-foot stops.
The orchestra, Les Muffatti, is a Belgian collective, named for Georg Muffat and mostly working in early Baroque repertoire. On this recording they are a 10-piece string orchestra, plus harpsichord continuo. Jacobs writes that oboe parts have been omitted because they largely double the violins, but the incompatibility of Baroque oboes with the modern tuning of the organ seems a more likely cause.
As so often with rejigged Bach concertos, the listening experience here moves from comfortable familiarity in the opening tutti to the jarring introduction of an unfamiliar solo instrument. But Jacobs plays with smooth legato lines and well-chosen, if modest, registration choices, and ear soon adapts. These arrangements work best in the fast movements, and Jacobs makes much of the cascading sequences, subtly overlaying one note into the next to create warmth and flow. The orchestral sound is clean and precise, and benefits from the harpsichord continuo support, the only percussive sound in the entire ensemble and a valuable source of rhythm and propulsion. The slower movements are less effective, and here even the imaginative continuo struggles to maintain the shape of the music. Jacobs relies more on the elegance of his legato than on the colors the organ can provide, but the results feel bare. In two slow movements, BWV 156 and the Larghetto from BWV 1055, a temulant is added, but it feels intrusive and soon outstays its welcome.
Nevertheless, Bert Jacobs is clearly an adventurous and sensitive organist. And while his arrangements sometimes stretch the limits of historical credulity, he clearly has a close affinity with this instrument and shows it off to beautiful effect. The orchestra benefits from the church acoustic, giving warmth and body to the tutti textures. Good balance between organ and strings too, bringing the soloist to the fore, but without obscuring any orchestral detail.