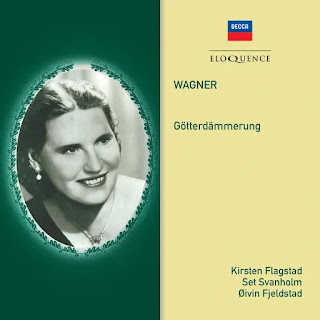 This 1956 Götterdämmerung is of significant historical interest for several reasons. It was the first version ever to be commercially released. It was also Kirsten Flagstad’s last performance as Brünnhilde—she had retired from the stage in 1953. Finally, and this might be pushing the historical angle a bit far, it marked the professional debut of Ingrid Bjoner, as Gutrune and the Third Norn. The whole project had a complicated history, but an engaging account is given in one of the liner essays, by Fanfare’s own Raymond Tuttle.

To paraphrase: Flagstad was coaxed out of retirement by Norwegian Radio for this studio production, with an almost all-Norwegian cast, the major exception being Set Svanholm as Siegfried. When John Culshaw heard about the project, he sought the rights to release the recording on Decca, a coup both for Flagstad’s involvement and for the claim to be the first-ever complete Götterdämmerung on a commercial recording. But it turned out the recording was not complete; around 40 minutes had been omitted. So Culshaw organized a team to go to Oslo, and in March 1956 recorded the missing sections, mainly the first scenes of acts I and II. Unfortunately, they ran out of time before they could record the scene change into Act II, scene 2, and so the recording was eventually released as “substantially complete.” But Decca still got in first, even if today we associate that period in the work’s history with the Furtwängler/RAI Ring cycle and the Keilberth from Bayreuth, both from 1953, but neither receiving official release for several decades because of singer contract issues.

The good news about this Götterdämmerung is that both of the lead singers were (still) on fine form. Flagstad, at 60, is a little more narrow of tone than in earlier years, but her voice still has presence and power, even in the high register. It is certainly a mature-sounding voice, but not matronly or plummy. Perhaps there is a little agility lacking, but that is not a huge loss in such a declamatory role. Svanholm was a mere 51, but if anything he sounds older than Flagstad. Both singers bring extensive Wagnerian experience to the project, and you end up admiring the idiomatic and dramatically engaged assumptions of the two roles more than worrying about technical deficiencies. I hear a slight wobble from Svanholm, but it’s of little concern against the strength of his vocal support and the sheer elegance of his every line.

The rest of the cast is reasonable, but without any standouts. Bjoner sounds suitably human as Gutrune, though she is clearly not in the same class at Flagstad. Eva Gustavson gives a passionate Waltraute, but without drawing much attention away from the star. Egil Nordsjø is convincing as Hagen, but he lacks weight, especially in “Hoiho! Hoho!” Waldemar Johnsen is a swoopy, wobbly Gunther, though all the notes are there and he fits well into the ensembles.

Conductor Øivin Fjelstad leads a carefully paced account. He accompanies the singers well, giving each plenty of space to shape and color phrases. But the reading lacks the frisson of a live staging, or of a studio account that can successfully recreate it. And he is not helped by an orchestra that lacks precision and focus. The strings often sound approximate in fast passages, and the brass intonation is also problematic. The horns do well though—no splits at the opening of act III or in any of the other horn calls.

This Eloquence release claims to be the first CD release on Decca and remastered from the original tapes. But, of course, most of those are Norwegian Radio tapes, and while the sound is a serviceable and quite vibrant mono, it is a significant step down from Decca’s stereo projects at the time in Bayreuth and later in Vienna. Curiously, the worst-sounding section is the opening, which was recorded by Decca—tape deterioration perhaps? On other labels, the recording has previously been released by Urania, Walhall, and Naxos. The first two of these are available on Spotify, where they sound more congested than the present release and have much more crackle. So whatever cleaning-up has gone on, it has brought more immediacy to the sound and reduced extraneous noise. Although we are not told anything about the remaster, documentation is otherwise very good. The front cover of the liner reproduces the original LP, where the work is titled “Die Götterdämmerung.” As well as Tuttle’s essay, there is a biographical essay about Flagstad, a recollection of her from Richard Bonynge, and an essay about the work, which includes a synopsis.

This is a recording that was clearly significant in its day, even if it was soon obscured by major Wagner releases in the 1960s, and on the same label. It is worth revisiting today for Flagstad and Svanholm, even if nobody else in the cast approaches their stature.