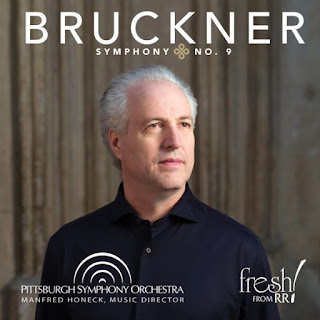 Manfred Honeck’s impressive discography with the Pittsburgh Symphony raises high expectations for this new Bruckner Nine, and it doesn’t disappoint. Honeck has a knack for reinventing core Romantic repertoire, but without moving outside of established performing traditions. He pays particular attention to dance forms—the Bohemian dances in Dvořák, the Ländler in Mahler—and interprets the music accordingly, often finding a wealth of rhythmic subtly and interest in forms that other conductors treat as merely generically rustic. Honeck also likes to tell stories: Even in the most abstract of works he will find associations and ideas, which he will then elaborate through his interpretation, that narrative impulse offering ever-more sophisticated nuances and variations to justify the repetitions of symphonic form.
All of which stands him in opposition to many of the prevailing tendencies in the recent history of Bruckner’s Ninth Symphony. Unlike many conductors, he is not content to present the work as a monolithic edifice, nor to trust the work’s formal elegance to deliver meaningful structure or progression. The liner to this release is dominated by a huge essay by Honeck himself, giving a detailed account of his interpretation of the music. The first movement, he says, is all about death. Honeck suggests that Bruckner is anticipating his own death here. He quickly acknowledges that this is historically suspect, but it doesn’t matter, it is just the starting point for his interpretation. The performance is dynamic and incisive. Tempos are about average, perhaps a little faster, but Honeck has an impressive ability to deliver weight and impact without resorting to glacial tempos. And the tempos are continuously fluid, with brisk and often surprising accelerandos into big thematic statements. And when those big themes come, Honeck sways their rhythms in almost imperceptible ways (a legacy from his hero, Carlos Kleiber) to drive and shape the music. The orchestra is on excellent form here, particularly the brass, whose weighty but focused tone brings scale and majesty to the music.
True to form, Honeck interprets the Scherzo as a dance, though that takes a leap of imagination, given the drama of the movement. It begins with luminous pizzicato in the strings, before the brass enter, again delivering impressive weight and impact. And if none of this sounds particularly dance-like, the oboe countermelody, which Honeck describes as “played in the style of an Austrian country musician” provides suitable relief, and without relaxing the pace. The Trio is surprisingly fast, unnecessarily so perhaps, but is illuminated with glittering textures from the strings and woodwind.
In his essay, Honeck associates the Finale with the Agnus Dei, not through any specific word setting, so much as in tone and style. The result is a more subdued reading than the previous movements might lead us to expect, and a slow one too, 27:46 puts it at the longer end of the spectrum. The orchestral textures now feel more subdued, and the rubato and phrasing, while still flexible, no longer offer the immediacy and surprises that were so startling in the first movement. The Adagio is always the heart of Bruckner’s Ninth Symphony, but Honeck takes it to another level, of spiritual contemplation and personal reflection. He makes no apology in his essay for not including a Finale completion, but the music gives the answer: Nothing could possibly follow an Adagio of this solemn intensity.
The orchestra deserves equal praise for their performance here. The distinctively American brass sound works wonders in Bruckner, but the sheer precision of the playing from all sections elevates every phrase, and the distinctive woodwind solos—sometimes rustically styled, but not always—are another bonus. The SACD sound is immediate and involving, with a surprising amount of presence for the rear speakers. The double basses seem to be on an elevated platform centre-stage, and the sheer quantity of bass, from them and the timpani, in the central speaker takes some getting used to, but is welcome nonetheless. Another top-quality release from Manfred Honeck and the Pittsburgh Symphony, recommended accordingly.