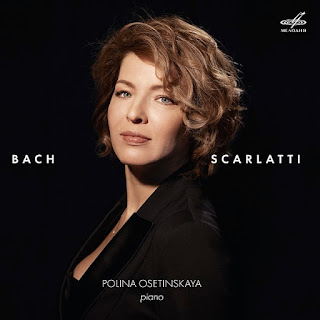 Russia has a distinguished tradition of Baroque music played on the piano, but the styles and techniques, and even the instruments, increasingly distance it from Western trends, towards historically informed, which is to say lighter, sounds. But a significant exception needs to be made for transcriptions, by Romantic-era pianists, of harpsichord and organ works. Here, pianists the world over seem to agree that round, flowing phrases and warm, legato harmonies suit the style—a period performance of sorts, but of the transcriber’s time. This new album of Bach and Scarlatti from Russian pianist Polina Osetinskaya is therefore conventional in some ways, though it stands out for the sheer elegance of Osetinskaya’s playing, and for the intriguing approach to the program. And, despite the common currency of Bach transcriptions, this is clearly the playing of Russian pianist, with immaculate and finely honed technique. Every piece here has that unmistakable Russian virtue of clear and definite voicing, with each note carefully placed, and each harmony voiced with confidence and clear intent. The result is an absorbing performance, the textures even and well controlled, the rubato modest, but with everything imbued with a pervasive feeling of depth.
Osetinskaya was born in 1975 and studied at the Moscow Conservatory. She plays all over the world, but the main focus of her career seems to be in Russia, since she is, amongst other things, a specialist in contemporary Russian music, collaborating with composers such as Leonid Desyatnikov, Vladimir Martynov, Pavel Karmanov, all leading names there, but none with any particular traction—sadly—in the West. Osetinskaya also performs a great deal of Romantic Russian piano music, and her previous albums for Melodiya have featured Rachmaninoff and Tchaikovsky. Presumably that link with the late Romantics was her impetus for this album, an affinity more with the arrangers than with the music itself (though it is probably worth remembering the pedagogical role of Bach in Russia—you’re not likely to graduate as a pianist from the Moscow Conservatory without gaining a thorough knowledge of his keyboard works).
The liner note to this release, by Ekaterina Biryukova, describes how Osetinskaya has planned out the program as a “single composition” with a “strict tonal plan.” Osetinskaya’s starting point is the fact that Scarlatti and Bach were both born the same year, but never met and wrote in contrasting styles. And yet, by focusing on minor-key works, and choosing works in related keys, a continuity emerges. Arrangements of Bach choral preludes—the well-known ones have been deliberately chosen—appear at regular intervals as “identification beacons.” Between these, we hear faster works, predominantly Scarlatti sonatas, but also Bach’s Italian Concerto and a Siciliano from a flute sonata.
The playing is luminous from beginning to end. In Osetinskaya’s hands, none of this music is ever trivial. Even cadential ornaments are emphatically placed and rhythmically precise. Similarly, the phrasing is conceived over broad spans and articulated through gradual dynamic changes rather than localized tempo shifts. In the chorale preludes, the cantus firmus always stands out clearly, but the separation of voices seems to be achieved more through varied articulation than dynamics, with the main melody always the most legato and the counterpoints lighter for their feeling of separation. That effect is particularly apparent in the Andante of the Italian Concerto, where the bass line chimes in round, clear, bell-like tones, while the melody unfolds playfully above.
Slow movements are often surprisingly slow. That Andante, for example, times out at 6:40—barely an andante at all—but Osetinskaya always manages to hold the mood through her long, arching melodic lines. Faster movements are brisker, though still well below HIP tempos. The Scarlatti sonatas are a mix of fast and slow, but the faster ones, Kk 377 and especially 141, are characterized by well-placed and focused accents, punctuating a still-legato touch, though now given a greater sense of momentum and drive.
Recorded sound is good, from Cinelab Studios, which seems to be in London, although the engineering team are all Russian. The bass end has excellent presence, but without overpowering, which is ideal for Osetinskaya’s generous pedaling and often bass-heavy voicing. If you are listening to a download or stream, the liner can be accessed from the Melodiya website. The English translation of the Russian liner note is hardly idiomatic, though it gives a good idea of the concept behind the album: Bach transcriptions and Scarlatti sonatas organized into a continuous recital-length unit, and performed as such by a pianist with a gorgeous tone and keen sense for broad structural connections.