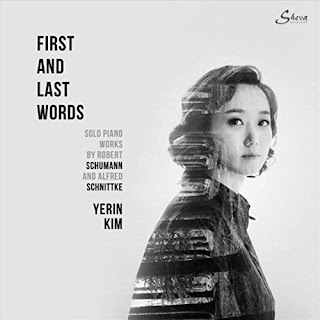 
Pianist Yerin Kim has chosen an adventurous and notably unvirtuosic concept for her debut recording. First and Last Words presents the earliest and latest piano works of Schumann and Schnittke. The result is a curiously angled double portrait, charting very different stylistic trajectories, and arguably doing both composers a disservice by omitting their finest piano works. But the musical connections that Kim draws are fascinating and make for satisfying listening, even if the biographical and historical significance remains tenuous at best.
Stylistic connections between Schumann and Schnittke are not obvious, and Kim makes no effort to trace specific links in her liner note. Both composers used note ciphers in their music, as in the Abegg Variaions that opens the recital. Also, Schnittke saw his musical outlook as intrinsically Germanic (his father was from Frankfurt), and there is a strong 19th-century Romantic element to much of his work as well. In 1993–4, Gidon Kremer organized a festival of chamber music by the two composers at the Philharmonie in Cologne. Hans-Joachim Wagner was given the unenviable task of drawing connections in program notes for the recitals. Those notes were published together in the volume Begegnungen: Alfred Schnittke und Robert Schumann : Beiträge zu einer Kammermusikreihe in der Kölner Philharmonie (Dohr, 1999), for readers who want to explore the connections further.
Yerin Kim is mostly happy to let the music speak for itself. Her approach to both composers is emotive and fluid. The readings are dramatic, although climaxes are rarely emphatic, and the loudest sections, especially of the Schnittke, lack a sense of physical presence. Perhaps the issue is one of taste, of Kim always making the piano sing, rather than emphasising the physical, percussive aspect of the instrument—something that both composers explore.
Schumann, both early and late, sounds lyrical and elegant in Kim’s hands. In the early works, the Abegg Variations and the Allegro, op. 8 (a first movement of an abandoned sonata), she makes the most of the rhetorical gestures—the imposing introductions, the consciously reticent transitions and developments—but also lets melodies run freely. The Ghost Variations are more austere, and while Kim retains the flexibility of phrasing, her flourishes are now limited to occasionally leaning on melodic ornaments or subtle weighting of broken-chord gestures.
Schnittke’s Five Preludes and Fugue is a student work, from 1953–54. The composer considered them juvenilia, and they were not published in his lifetime. Since his death, the set has gone under two titles (the manuscript has none). The first recording was released in 2010, played by Drosostalitsa Moraiti on the Toccata album Schnittke Discoveries (TOCC 0091). There, the set was called Six Preludes for Piano. Since then, Sikorski has published the set as Five Preludes and Fugue for Piano, so that looks set to become the official title. The Preludes were not included in the Simon Smith album of 2014 (Delphian 34131), Alfred Schnittke Complete Piano Music (though that was before the Sikorski publication), making this only the second recording. The Preludes play out as a series of stylistic studies, though we probably shouldn’t read too much into that: They are more likely composition exercises than early experiments in polystylism. But whichever way, they provide an effective transition from the Schumann. Kim mentions Chopin and Liszt as influences, and her performances locate the music squarely in the 19th century.
The Five Aphorisms for piano and reciter date from 1990. In performance, the short works are intended to be interspersed with poems by Joseph Brodsky. The choice of poems is left up to the performers, a clever ruse, given that Schnittke’s fame by this point had spread across the Russian- and English-speaking worlds, and that Brodsky wrote in both languages. The music is in Schnittke’s late style, ascetic and bleak. Kim invokes this atmosphere well, with a fairly neutral performance style, still legato, but now with only impulsive rubato at climaxes. Schnittke’s notated dynamics occasionally go to extremes, but Kim retains a continuity across each of the movements. That increases the sense of bleakness, although it compromises the textural variety—the first-movement chorale in particular could be more ethereal, and more separated from its context.
Kim’s notes for the Five Aphorisms are a little misleading. She writes: “By this time in 1990, Schnittke was mainly living in Hamburg Germany after being exiled from Russia. He had survived a few strokes by this point and was physically remote and weak.” Schnittke was not exiled from Russia: he was a dual citizen and dual resident, maintaining an apartment in Moscow. And by 1990 he had only suffered one stroke, the next would be in 1991. But Kim’s documentation is fully redeemed in the last two pages. This is at least the sixth commercial recording of Aphorisms, after Boris Berman (still the first choice for all of Schnittke’s piano music), Anna Gourari, Denys Proshayev, Simon Smith, and Peter Martin. But all the previous releases I have heard have ignored the stipulation that Brodsky’s poetry should be recited between the movements. There is no reciter with Kim either, but she has done the next best thing and selected five Brodsky poems, one for each of the movements, and reproduced them in the liner—a nice touch that elevates the whole project.