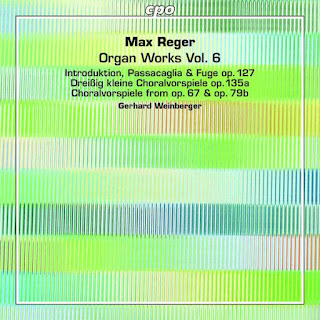 This release is volume 6 in Gerhard Weinberger’s complete Reger organ works for CPO, and, given that each is two well-filled discs, presumably the penultimate installment. The recordings were made on two organs, the Steinmeyer organ of the Christuskirche Mannheim for disc one (opp. 127, 67, 79, 80) and the Bittner organ at the Pfarrkirche St. Walburga in Beilngries for disc two. The instruments date from 1911 and 1913 respectively, and the recording is billed as “played on historical instruments from Reger’s days.” Given the continuing loyalty to German traditions and tastes in more recent instrument construction, that claim is of dubious significance, and all of the updating to the organs in question, digital consoles and the like, also stands in the way of any implications of historically informed authenticity. But no matter, these are both fine organs, perhaps a little smaller in scale than many that are used to record Reger’s more gothic offerings. Both have plenty of power, but give a sense of contained might; volume, yes, but also a depth to the tone and complex, well-balanced richness, especially in the mid-register.
The main offering here is the Introduktion, Passacaglia und Fuge, op. 127, a truly colossal concert work, timing here at over 31 minutes. It begins with a series of huge minor chords, only distantly related, and linked tenuously with chromatic descents in several voices. But things settle down quite quickly, and the quieter music that follows is particularly luminous under Weinberger’s fingers. James Altena, who has consistently favored the Bernhard Buttmann series on Oehms over these Weinberger recordings, has complained (Fanfare 41:5) that Weinberger lacks the grasp of form that Buttmann demonstrates. That is certainly a crucial factor in huge sprawling works like this, but, to my ear, Weinberger makes a virtue of his focus on the moment, especially in these quieter passages. The melodic lines are played with elegant legato, and the counterpoint is easy to follow, and although the results can seem directionless, the sheer beauty of the textures is hard to resist.
Another of Altena’s complaints was about the seemingly random order in which the works are included in the various releases, and that certainly remains the case here. The logic seems to be that Weinberger is choosing his programs to fit the organ that he is playing at any given time, another aspect of that spurious authenticity drive. Any complete Reger set is going to be filled with a large number of chorale preludes, music for liturgical use that was never intended for anthology, so perhaps breaking up these sets is a virtue, or at least a mercy. In fact, Weinberger is able to maintain interest across all of these collections with his subtle but inventive choices of stops. The Bittner organ on disc two is a smaller instrument—three manuals to the Steinmeyer’s four—but it has plenty of character, if a little less weight. Weinberger makes greater use of the reed stops on this instrument, often taking the hymn tune down to just a solo stop to contrast the nebulous diapason accompaniments. He also finds occasion for tasteful use of the tremolo on the second manual in the op. 135 Chorale Preludes.
Recording quality is excellent from both churches. Surround sound is used discreetly to add warmth, especially in Beilngries, where the church resonance is more apparent than in Mannheim. Documentation includes full organ registrations, photographs of the instruments and consoles, and interesting notes on the instruments and repertoire with readable, if not wholly idiomatic, English translations.