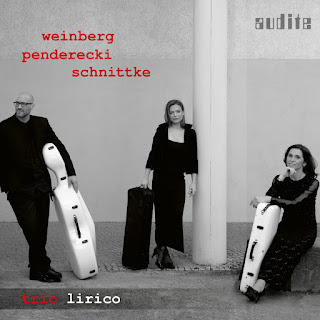 The German ensemble Trio Lirico made an impressive debut on disc in 2016 with the two string trios of Max Reger. For their second album they have ventured further into the 20th century, with recordings of the string trios by Weinberg, Penderecki, and Schnittke. The liner note draws connections between the three works by presenting them all as messages of defiance against communist regimes, and as two of the three players grew up in the GDR, this angle no doubt has a personal resonance. But the three works are characterized more by contrast than similarity, and the program is cleverly structured to move from the Shostakovich-like tonality of the Weinberg, via the complex mix of Sonorism and tonality in the Penderecki, and finally on to the more austere utterances of Schnittke.
Now that Weinberg has been fully recognized as a distinctive musical voice, comparisons with his close friend Shostakovich seem increasingly redundant. But the music of the String Trio, composed in 1950, comes closer than most, especially in its outer movements. The difference is more one of temperament than style—the chamber music of both composers works within the remit of Socialist Realism, but Weinberg is less focused and furrow-browed. His musical discourse is substantial and well argued, but you get the feeling that he could just drop it all at any time, and make out it was all a joke. Many of Weinberg’s endings give that impression too, functional but abrupt, without any grandstanding. This trio seems to just grind to a halt, an impression beautifully realized by the players. The other interesting feature of Weinberg’s String Trio is the distinctly Jewish Andante middle movement, with a melody rich in augmented seconds and played with daring portamento by violinist Franziska Pietsch. Performance-wise, this is the highlight of the disc, and it’s little wonder that Spotify trailed the release with this as a preview: It’s clearly the single of the album.
Penderecki’s String Trio opens with a series of polytonal dissonances. The work was completed in 1991, but this opening looks back to the composer’s avant-garde period in the 50s and 60s. It soon moves into other areas—expressive, lyrical, even Minimalistic at times. Trio Lirico give an impressively even account, maintaining the directness of expression while acknowledging the music’s textural fluidity. Schnittke’s String Trio is probably the best-known and most often recorded work here. It was written to commemorate the centenary of the birth of Alban Berg in 1985, with Schnittke drawing on his own German roots (his father was a German Jew and his mother Volga Deutsch) to plug into the Second Viennese School aesthetic. In fact, the work demonstrates that Schnittke’s musical outlook was more Russian than he would be prepared to admit; structurally ambiguous, filled with progressions between unrelated harmonies, and regularly interrupted by the sound of Orthodox Chant. The music is by turns anguished, furious, and meditative, moods that Trio Lirico express with a direct passion.
The most obvious comparison for this release is a disc on Avie (2315) from 2014 by the now-disbanded Ensemble Epomeo (review here). They presented an identical program, but also included a collection of Signs, Games and Messages by Kurtág. Trio Lirico have the better audio quality (surround-sound downloads are also available from the website, audite.de), but the difference of interpretive approach in instructive. In the new recording, Trio Lirico lives up to its name, and when any of these composers lets their musical argument give way to a beautiful melody—and they all do at some stage—the players really make the most of it, applying rubato that often seems audacious against the Epomeo accounts. That really benefits the Weinberg; the Andante movement comes to life here in a way that makes it seem like a different piece compared to Epomeo’s more pedestrian reading. In the Penderecki and Schnittke, the superior audio gives an immediacy to the grinding dissonances that the earlier recording can’t match. But there is something about Epomeo’s more austere accounts that is lost in the floating and ethereal sound to Trio Lirico. That is particularly the case in the Schnittke, where the Orthodox chant should feel like a voice from beyond, an interjection into the musical discourse rather than a continuation. But the sheer listenability of the Trio Lirico recording is an advantage in all these works. The fact that the players can spin their melodic lines, often across continually dissonant harmonies, allows the ear to follow the musical argument in a way that requires much more effort with the earlier release.