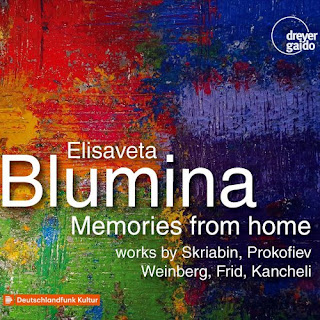 Elisaveta Blumina is a Russian-German pianist now based in Berlin. So, Memories of home refers to her early years in the Soviet Union. Though, as she herself states, Russian piano training tends to focus on the Austro-German repertoire: They play Czerny études just like everyone else. But, she says, “Russian and Soviet music is, in some natural but subtle way, ‘in my blood”’. Another motivation for the selections on this recital is Blumina’s sense of synaesthesia. She says “Ever since childhood I have associated notes and sounds with colours.” This led Blumina to pursue visual arts as an avocation, and a detail from one of her canvases is reproduced on the album cover. It also leads to an intensely coloristic approach to the textures in each of these works.
That is particularly evident in the Scriabin, the early op. 16 Preludes set. There is no sense in this performance of looking forward to Scriabin’s more adventurous harmonies, but even in this traditionally Romantic framework, the sense of harmony as color, shared by composer and pianist, is everywhere evident. Six of Prokofiev’s Visions fugitives follow, and again, the music is richly shaded and carefully nuanced, although lacking some of the angularity of phrasing that other pianists apply for focus.
Blumina makes a claim to be the instigator of the recent revival in interest in the music of Mieczysław Weinberg, and devotes two pages of the liner note to him, despite the two Weinberg works on the program lasting around three minutes. She has certainly been an important voice in the Weinberg revival, with many recordings of chamber music and solo piano works, mainly on the CPO label. These two short fugues are typical Weinberg, well-constructed but self effacing, the first ending with a grandly Baroque cadence, stylistically disjointed, but woven in with typical fluency by the composer.
Grigori Frid is another forgotten Soviet composer whom Blumina has championed, a recentrecording of his clarinet sonatas on MDG was a fascinating discovery. Here we have Hungarian Album, a set of piano works written in 1966 when was a guest of the Hungarian Composers Federation. The music consciously draws on Hungarian folk music, but remains foursquare and Classical, at least compared to Bartók. But Frid explores the modal character of his sources instead, and—again, typically for this album—the results are richly colored.
The second disc is devoted to Kancheli’s Miniatures for piano, 22 selections from a collection of 33. Blumina knew Kancheli personally (he died in 2019), and it was he who entrusted the works to her: They receive premiere recordings here. Blumina reports that she took issue with the composer’s slow metronome marks, and played the works faster, with his blessing. The music is derived from Kancheli’s film work, as is immediately evident from the character of each of the movements: atmospheric, gently melodic, and conventionally styled. This isn’t music of great interest, and Blumina was probably wise not to include the entire set (there would probably have been space). But Blumina’s devotion to the Eastern Minimalist cause is everywhere apparent, and she brings color and warmth to each of Kancheli’s miniatures.
The recorded sound, from Deutschland Kultur, is warm and involving. Blumina’s liner notes are engaging, and well translated into English by David Boyd. They generously include all of the poems that preface the movements in Frid’s Hungarian Album, which remarkably, still make perfect sense after translation from Hungarian to German, and then to English.