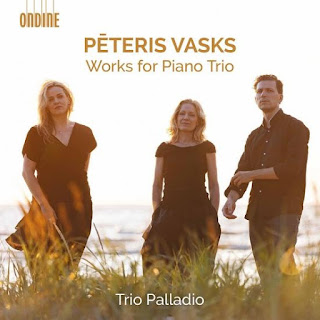 Like most of the composers loosely grouped into the “Eastern Minimalist” school, Pēteris  Vasks regularly makes arrangements of his works for different ensembles. This disc presents three piano trios, but only the second, Episodi e canto perpetuo (1985), was originally written for these forces. The opening Lonely Angel (this version 2019) was originally the fifth movement of Vasks’s Fifth String Quartet, composed in 1999 for the Kronos Quartet, while Plainscapes (2011) was originally for violin, cello, and choir, that version written in 2002 and premiered by Gidon Kremer. But the sound of solo violin and cello is a common factor linking each of these works in their various versions, “my beloved strings” as Vasks describes them in justification for the original scoring of Plainscapes.

Lonely Angel and Plainscapes are both classic Vasks, slow-moving, contemplative scores, the individual lines based on repeating phrases, but the music always retaining a sense of mystery through the harmonies, tonally ambiguous and often resting on mild but sustained dissonance. The music also has a sense of direction and evolution that distinguishes it from the more static scores of Arvo Pärt, yet the direction itself remains nebulous and intangible. Vasks talks in mystical terms about Lonely Angel, dedicated to his own guardian angel, and also inspired by a painting by Hugo Simberg, The Wounded Angel. Plainscapes is inspired by nature, specifically the Zemgale plain region of Southern Latvia. The original version culminates with the choir imitating birdsong, an effect that Vasks has reworked into a spectacular, though still atmospheric, piano solo. The work apparently has a sectional structure of interconnected sub-movements, but the aural experience is of gradually evolving continuity.

Episodi e canto perpetuo is an early work, and a fascinating window onto the early development of Vasks’s style. The piece was written in response to Messiaen’s Quartet for the End of Time, and even without hearing it, a connection seems obvious between the serene slow-moving string solos of Messiaen’s score and similar textures in Vasks’s mature music. Episodi seems like a transitional stage between the two. Like Messiaen’s quartet, it is structured in eight movements. A quiet and meditative mood prevails, but the serenity of the string solos is emphasized through contrast to a series of oppressive climaxes, where heavy, dissonant textures are hammered out by all of the instruments, and sustained too long for comfort.

Not an easy listening disc, then, and even the quieter works have an expressive intensity that focuses the listener’s attention. The performances are excellent. Trio Palladio is an all-Latvian ensemble, made up of pianist Reinis Zariņš; Eva Bindere, concertmaster of Kremerata Baltica; and Kristīne Blaumane, principal cello on the London Philharmonic. The players are pictured with Vasks in the liner, which also states that the arrangement of Lonely Angel was made specifically for the album. The sheer virtuosity of the string playing is an asset in all three works. The recorded sound is warm and involving, an ECM-style sound picture, ideal for this music.