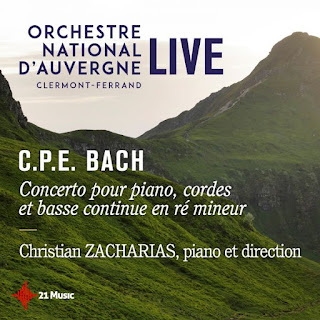 
This release is the sixth in just a year from the enterprising Orchestre national d’Auvergne Live label. It is a small-scale affair, taking individual works, or sometimes whole concerts, from the orchestra’s live schedule and making them available via streaming platforms. As the orchestra sees it, streaming is the future, and while record collectors might disagree, the logistical benefits are clear—minimal overheads but potentially global exposure for the regional orchestra.
The orchestra itself has a full-time string section, to which a part-time wind section is occasionally added, as on the Beethoven Seventh which the label was launched. But the majority of the orchestra’s concerts are of string orchestra repertoire. The group regularly engages high-profile conductors and soloists. That’s a boon for marketing, but it makes artistic sense too, given the profound effect a distinctive soloist can have on the sound and style of a medium-sized ensemble. On a previous release, Thomas Zehetmair led a program of Strauss and Bruckner arrangements, bringing his sinuous but focused Romantic phrasing to both, then clearing the air with a lively Haydn violin concerto.
This latest release features Christian Zacharias, leading a C. P. E. Bach concerto from the piano. Zacharias is a respected authority on the keyboard music of the Classical era, but his many recordings over the decades have mostly focused on the biggest names: Mozart, Schubert, Beethoven. The orchestra’s publicity for this release emphasizes that, not only was this Zacharias’s first appearance with the group, but it is also his first recording of the concerto.
Both the composer and the work sit at the turning point between the Baroque and Classical eras. The concerto, from 1748, is scored for solo keyboard, strings (seemingly one to a part), and figured-bass continuo. Most of the available recordings (three of the four others that appear on a brief search) present the solo part on harpsichord, with only Michael Rische playing the concerto on piano, on a recent Hänssler release (19043) with the Leipzig Chamber Orchestra. Zacharias makes the most of the opportunities the piano affords, clearly distinguishing melody and accompaniment, and subtly blending the sound in some of the passagework. But otherwise, the choice of piano over harpsichord is less significant than it might seem. The performance is no slower than the period instrument alternatives, and the string section, while expanded from the score’s implied one-to-a-part, is nimble and light, with excellent coordination. A harpsichord continuo is also included, and is well captured by the engineering, but its delicate ornaments at cadences never sound anachronistic against the piano.
The second movement is marked poco andante, but is taking daringly slow. The movement unfolds as a single utterance, with the piano playing almost continuously throughout, its line gradually become more elaborate, but always retaining its lyrical melodic flow. Towards the end the orchestra begins to struggle with the sheer concentration required, and the ensemble begins to loosen. Fortunately, Zacharias carries the day, and delivers us safely into the finale, marked allegro assai, but not rushed here, so much as gently propelled through the precise string articulation.
The ending is abrupt. Bach doesn’t include any final flourishes, and a separate conductor might have had more scope to fashion a conclusive ending. All of the applause is included, which seems an indulgence, but it leads into a gratifying encore, a solo Rondo, here given a light and playful reading by Zacharias. He and the orchestra are clearly attuned to C. P. E.
Where other performers, especially on the harpsichord, invite us to question whether Bach looks to the past or to the future, Zacharias and the Auvergne orchestra instead find an ideal style for the music, combining Baroque and Classical elements as needed, leaning more towards the latter, but resolving any tensions between them through the sheer exuberance of their sound.