From Shadow To Light - Sonora Winds 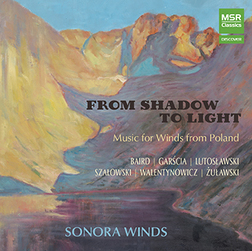 
This album presents five wind trios (flute or oboe, plus clarinet and bassoon) and one wind quartet from Poland in the middle decades of the 20th century. The program is arranged chronologically (only the Lutosławski is brought forward for an imposing opener) and spans the years 1937 (Szałowski) to 1967 (Garścia). These were turbulent times for Poland, but the stylistic unity, and generally high quality, of these works suggests a continuity in the nation’s musical culture. Today, we remember the Polish late Romantics, up to Moszkowski and Paderewski, and then also the 60s radicals of the Warsaw Autumn generation, but the composers here all fit into the considerable gap in between.
Where the Polish late-Romantics looked to Russia for inspiration, this music is more indebted to France—perhaps partly on account of the dominance of French composers in chamber music for winds. Everything here could be classed as Neoclassical, for its tonal orientation and the crisp, highly contrapuntal textures of most of the works. But there is no looking back to the past here, and no knowing self-reference: The French Neoclassical models are applied in the service of cleanly articulated post-Romantic textures. And, although the chronological ordering does give a slight sense of gradually expanding horizons—presumably the intention of the album title, From Shadow to Light—the personalities of the individual composers have a much greater bearing on the modernity, or otherwise, of the results.
That is particularly true of the Trio by Lutosławski that opens the program. Lutosławski spent much of the war performing as part of the piano duet with Andrej Panufnik in Warsaw. This Trio dates from 1945, soon after he had fled the capital. The textures are lively and vibrant, but the music maintains a down-to-earth quality through some sour, though never outright dissonant, harmonies. In retrospect, we can hear the music as transitional, towards Lutosławski’s more frenetic, aleatoric approach. This music is just as colorful, and none the worse for being a little more orderly.
Antoni Szałowski (1907–1937) was a pupil of Nadia Boulanger, a significant link with the French Neoclassical school that influences much of this program. And his Trio (1937) is the closest in style to that Boulanger/Stravinsky axis, though again, without any knowing references to the past, but rather lively, contrapuntal wind textures modelled along Classical lines. Wawrzyniec Żuławski (1916–1957) and Janina Garścia (1920–2004) both provide variations sets, and while both are inventive, neither moves far stylistically from its opening theme. The Garścia Thema con Variazioni is the latest work on the disc, from 1967, but it is a modest affair, written for educational purposes, the liner tells us. That is also true of the 1952 Trio by Władysław Walentynowicz (1902–1999), a Gdańsk-based composer, pianist, and educator. Walentynowicz’s first movement “All in Harmony” is particularly satisfying, with sophisticated but light contrapuntal textures, all created through simple scale patterns in each of the instruments.
The most interesting work on the program is the 1967 Divertimento by Tadeusz Baird (1928–1981). Like Lutosławski, Baird would go on to become one of the leading lights of the “Sonorism” Modernist movement in Poland, but this piece is very much a transition towards that. The (uncredited) liner note tells us that the work employs serial techniques, but on first acquaintance, it seems as efficiently Neoclassical as the rest of the program. But the serial rigor soon becomes apparent, with motifs inverted and melodic lines strung out to full note rows. But Baird always retains a sense of reserve, his exploratory techniques never compromising the refinement of his textures.
The recording was made in Minneapolis in 2018, and seems to be a product of that city’s close links with Polish culture. The Twin Cities Polish Festival and the Polish American Cultural Institute of Minnesota are both credited as sponsors. Sonora Winds is a collective of young freelance orchestral musicians from the area, and two of their four names are Polish (bassoonist Marta Troicki is also credited as a producer). They have uncovered some interesting music here, most of which seems to be appearing for the first time (though there are several other recordings of the Lutosławski). Performances are spirited and vibrant, with good balance between the players, but also with the independence of line that woodwind chamber music thrives on. The recording was made in a church, the Lutheran Church of Christ the Redeemer, Minneapolis, an overly reverberant acoustic, which, combined with distant miking, makes the ensemble sound recessed. That is a shame, but it doesn’t significantly affect the clarity of the textures. A fascinating release, largely of documentary value, but well worth hearing for the Lutosławski and the Baird.