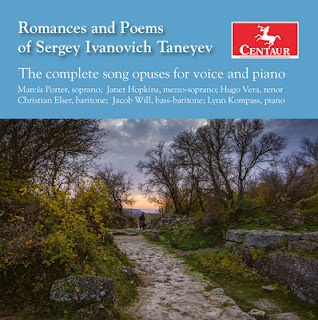 Sergei Taneyev’s output was modest, his published works running to just 36 opuses, but it is notoriously difficult to pin down. Early works can seem late, through high number designations, such as the early string quartets, published after his death as Nos. 7–9. And many other works not published in his lifetime never received opus numbers at all. This album presents “The complete song opuses for voice and piano,” a carefully worded claim, omitting at least 20 songs that were never collected into opus sets. The chronology of the published songs broadly follows the opus numbering, but the relatively high number of the op. 17 10 Romances is misleading. It was published in 1905, the set made up mostly of earlier songs, some of which he revised for pubication, plus two new ones. This was effectively the start of Taneyev’s retirement, the year he stood down from his position at the Moscow Conservatory. The later sets, all designated “Poems” were written in 1908 (op. 26) and 1911–12 (opp. 32—34). Taneyev’s choices of texts are catholic, if sometimes obscure. The op. 17 songs begin with texts by Shelley, translated into Russian by Balmont, but continue with Russian poets: Fet, A. K. Tolstoy, Nekrasov. The op. 26 set are all of Russian translations of foreign poets—French, German, English, Spanish, Italian—while the last three opuses all set the poetry of Yakov Polonsky, a popular poet of the 19th century, working in Pushkin’s milieu.
The intricate counterpoint that characterizes Taneyev’s orchestral, choral, and chamber music is entirely absent here. Instead, lyrical vocal lines are accompanied by conventional, if sometimes florid, piano accompaniments. That simplicity is usually a virtue, allowing the melody and the words to come through without competition. But the sheer simplicity of the accompaniments can be surprising—the fourth song of the op. 10 set, for example, “The blessed star has gone”—plays out over a pastiche of the “Moonlight” Sonata. In the later songs, Taneyev occasionally indulges in evocative scene setting. Op. 26/4 is titled “Stalactites,” and the piano accompaniment evokes the sound of water dripping in a forgotten cave. And the last song of the op. 32 set, “The Winter Road,” is propulsive and menacing, in the spirit of Schubert.
These songs are rarely recorded as complete sets, so the present album is of considerable documentary value. Unfortunately, the performances and production standards are no more than serviceable. The liner note (by pianist Lynn Kompass) points out that the designation “Romances” referred to a sentimental song style in the 19th century. Accordingly, all of the five singers present the vocal lines in a operatic, coloratura style. It is hard to question the commitment and passion of the results, but none of the voices match the musical demands. It shouldn’t be necessary to have Russians singing this music, though this is the only recording I’ve found not to be sung exclusively by a Russian singer, but the Russian qualities of focused tone and cleanly articulated consonants are noticeably absent. The best pronunciation comes from mezzo Janet Hopkins, while the most musically satisfying performances are from soprano Marciá Porter and tenor Hugo Vera. Pianist Lynn Kompass makes a good job of setting the mood and atmosphere for each song, though she is hampered by the recessed sound of the piano, which, while balanced well against the singers, sounds distant in the sound picture. The singers themselves are reasonably well captured, though with more resonance than this often-intimate music requires.
Documentation is skimpy. A full track listing tells us who is singing when—the singers interchange almost continuously, though their voices are sufficiently similar to allow continuity. No texts are printed, but a link and QR code take you to a pdf online with the English translations, though not the sung Russian texts.
No claim is made for any of these to be first recordings, but the scarcity of currently available competition suggests that any previous complete sets were on long out of print Melodiya LPs. The only other complete opus set that appears to be available is an MDG release featuring mezzo Marina Prudenskaya and pianist Olga Gollej in the op. 34 Poems (3071917). Elsewhere, individual numbers turn up on celebrity recitals, the most high profile being Dmitri Hvorostovsky’s 2013 release in this moonlit night (Ondine 12162), with pianist Ivari Ilja. Hvorostovsky includes op. 17/5, 9, 10; op. 26/6, 9; and op. 32/4. It is hardly fair to compare any of the singers here to him, but it is fair to say that Hvorostovsky raises this music to a completely different level.