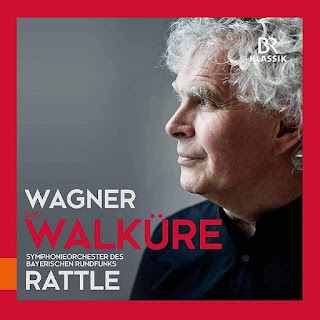 
Five years after the first instalment, Simon Rattle’s Ring cycle with the BRSO has now moved on to Die Walküre. The recordings are taken from live concert performances, at the orchestra’s Herkulessaal home in Munich. That’s a common model for opera recordings these days, and the most obvious competition for this Walküre are similar concert performances from Elder/Hallé (Hallé 7531, 2012), Janowski/Berlin RSO (Pentatone 5186407, 2013), Gergiev/Mariinsky (Mariinsky 0527, 2013), and van Zweden/Hong Kong PO (Naxos 8.660394–97, 2016). The BRSO have a head start over most of these for being a radio orchestra, and listening to this recording, it is clear that everything about the performance was set up with broadcast in mind. There is no semi-staging—the singers are all in front of the orchestra (possibly excepting the Valkyries) and remain static throughout, making the sound engineers’ job considerably easier.
Such concert performances, especially when released on orchestra own labels, tend to favor the orchestra over the singers, both in the marketing and the sound picture. Fortunately, Simon Rattle seems to be aware the danger, and gives a performance that focusses attention on the singing. The orchestral playing is predictably excellent—the woodwind solos always have character, and the low brass have an ability to add menace and bite without overpowering the orchestra—but Rattle seems to play down its role. The closing chords of the first act, for example, have impact and weight, but these final bars feel more like a coda to the singing than a symphonic culmination. Similarly, all the transitions—the gloomy bass clarinet lines, the Wagner tuba chorales—while always carefully shaped and phrased, are never indulgent and always move forwards into the following scene. In comparison to the versions listed above, Rattle’s approach is as dramatically engaged as Janowski’s, but less rushed. He brings the same sort of orchestral weight as Gergiev, but without his ponderous indulgences. Elder is more portentous and monumental than Rattle as well. Zweden’s Hong Kong account is probably the most similar: Both Zweden and Rattle give the impression of focused engagement from the podium, each approaching an ideal balance of urgency and impact.
The Rheingold in the Zweden/Hong Kong cycle appeared at almost exactly the same time as Rattle’s in 2015, and that time round, Rattle seemed to have the upper hand, with a superior orchestra, cast, and feeling for the music. For the Walküre, the balance between the two accounts is finer. Stuart Skelton sings Siegmund for both and is the strongest link in both casts (Matthias Goerne was the star attraction in Hong Kong, but many felt he wasn’t suited to the part of Wotan). In fact, Skelton’s account of Siegmund is now copiously documented, and as well as on these two recordings, he can also be heard on the versions from South Australia Opera (Melba 301091), Hamburg Opera (Oehms 926), Seattle Opera (Avie 2313), and Covent Garden (DVD Opus Arte 7270).
In other words, there is no need to buy this set on Skelton’s account, fine as he is. The rest of the cast is good, although not uniformly so. Eva-Maria Westbroek has an attractive, clear voice that suits Sieglinde. She also sings the role on at least three other available recordings, so she is a known quantity. Westbroek is a good match for Skelton, both producing a rounded sound but also with a real feeling of dramatic urgency, so most of the first act comes off well. Eric Halfvarson is on poor form as Hunding. His tone is loose and gruff, lacking menace. He sang Fafner in the Rhinegold, for which his voice is better suited, but Hunding needs more focus.
The best performance in act II is from Elisabeth Kulman as Fricka. She also sang the role in Rheingold, but gets more time in the spotlight here. Her singing is characterized by a sense of precision and rhythmic vitality, combined with an elegant clarity of tone. She is a commanding presence too, ideal for the role. James Rutherford is less convincing as Wotan. He was a last-minute stand in for Michael Volle at the concert, and on the recording comes across as a competent understudy. His tone is attractive and his singing precise. But he lacks weight and authority—a fatal flaw for any Wotan. Compelling Brünnhildes are thin on the ground these days, so we should be thankful for Iréne Theorin’s committed performance, even if she doesn’t tick all the boxes. Theorin sounds strained for much of the second act, though all the notes are there. She settles into role better in act III, moving closer toward Rutherford’s rounded tones. And everything comes together for the ending, the sheer quality of the orchestra carrying the final scene, however much Rattle directs our attention to the singers.
The sound quality is excellent. No surround is offered sadly, especially as Bavarian Radio have the facility; they broadcast in surround sound in Germany. The controversial acoustic of the Herkulessaal hardly impinges, with singers and orchestra all closely miked for a very dry but immediate sonic environment. Packaging is substantial without being lavish. Rattle is clearly the draw—the cover shows a photograph of the conductor, and his name appears in the same font size as the composer’s. A full libretto is included, with a gratifyingly modern English translation (Lionel Salter, 2011). Rattle’s Walküre is an attractive proposition, through the cast is variable. For the cycle as a whole to be competitive, the BRSO will have to find a top-tier Siegfried for the last two operas.