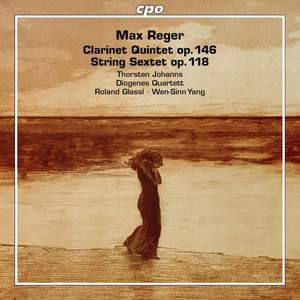 
Reger’s Clarinet Quintet and String Sextet date from his later years (1915 and 1911 respectively) and are considerably more lyrical and mellow than his reputation might lead you to expect. The composer’s stylistic trajectory followed an arc, peaking during his Munich years from 1901, when he was keen to be seen as progressive and radical. By 1911 he had moved to Leipzig, and in 1915 to Jena, his style becoming more mellow and stable each time, especially with the final move to Jena, a retirement of sorts—he was still only in his early 40s, but would die the following year.
The Clarinet Quintet, his last completed work, is very much in the tradition of Brahms. The clarinet soloist intones haunting melodic lines, with the strings supporting with intricate contrapuntal textures, which articulate novel—though rarely confrontational—harmonic progressions. The work is well represented on disc, with 11 versions currently listed on ArkivMusic, excluding this one. The top choices have long been the two versions from clarinetist Karl Leister, with the Drolc Quartet (DG 4775518) and the Vogler Quartet (Nimbus 5644)—there is also a 1990 version with the Philharmonia Quartet Berlin, nla. The present recording fares well by comparison. Thorsten Johanns and the Diogenes Quartet take slower tempos. The difference is slight, but it allows for clearer phrasing and a well-articulated sense of form. Leister is a master of fades to and from silence, and we don’t hear much of that from Johanns, who is content to start a phrase with more definition and then to blend the tones. Johanns also has a more focused tone, with suitable presence and definition, but sometimes lacking warmth, especially in the upper register. But the definition this brings, combined with the precision of the string playing, brings focus to the phrasing and harmonic structures, a valuable asset in a work so dominated by slow, lyrical music.
The String Sextet is a more complex and agitated work, although it is similar in spirit to the Clarinet Quintet, the music made up of bold, consonant harmonies, woven together through contrapuntal imitation in the six parts. Dense thematic statements regularly give way to more open, reflective passages, though even here the harmonic language remains unpredictable and erratic. It’s understated compositional virtuosity makes for a satisfying listen—Reger demonstrating his contrapuntal mastery, but through the melodic fluency of his textures rather than through any radical juxtapositions.
The work is a rarity on disc, in part due to the sheer technical difficulty it poses to performers. The Fanfare Archive lists versions from Die Kammermusiker Zurich (4:3, nla) and Ensemble Villa Musica (33:1). The latter is in the MDG series of Reger chamber works, a consistently impressive undertaking, and the main competition for CPO’s more sporadic survey. I also have a recording from the Wührer Streichsextett, part of a complete Reger chamber music edition, recorded in Heidelberg around 1970 and reissued on CD by Da Camera Magna, this volume 77 518. Most of those reissues are placeholders at best, mediocre performances remastered on the cheap. But the String Sextet is better than most, with impressive definition to the counterpoint, and not too much color lost in the transfer. This new recording is in a similar spirit, propulsive and clear, and with good balance between the lines. The same performers can also be heard, and seen, in a performance on the Maximum Reger DVD set (40:6). Though the interpretation is largely the same in the two recordings, the ambiance and recorded sound are very different. The DVD offers five channels, and while the result is satisfyingly immersive, the brighter acoustic (we are shown a wood-paneled hall) brings out the details more, especially in the cello parts. The sound on the CPO recording, made in a small church, is warmer and more homogeneous. The string sound has more weight, but at the cost of some impact from the accents. Even so, this is an impressive release, competitive for both works, especially the rarely heard Sextet.