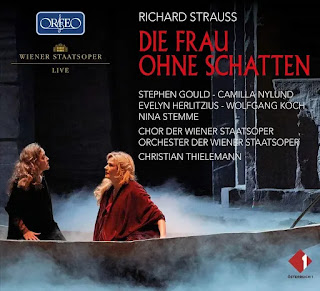 
This recording documents a staging of Die Frau ohne Schatten from Vienna State Opera, recorded from a single performance on May 25, 2019. The production, directed by Vincent Huguet, opened the season and was chosen to mark both the 150th anniversary of the opera house and the 100th anniversary of the opera itself, which was premiered there in 1919. Thielemann, of course, is a seasoned Straussian, and the orchestra, the Vienna Philharmonic in all but name, can be considered equally definitive in this repertoire. In fact, Thielemann has recorded the work before with the same forces, a DVD of Christof Loy’s production at the Salzburg Festival in 2011 (Opus Arte 10561, 36:3), which also included Stephen Gould and Wolfgang Koch in the same roles as here and Evelyn Herlitzius, then the Dyer’s Wife, now the Nurse.
The present recording is a co-production with ORF, presumably made for broadcast. The singers come across very well, but the orchestra is curiously subdued. Given the predominance of studio recordings of this opera, that impression may just be the result of Thielemann focussing attention on the stage rather than the pit. But the orchestra sounds much more vibrant on the Salzburg DVD, so perhaps not. In fact, Thielemann is able to rouse the orchestra for its set pieces, and the effect is even more menacing and mercurial for the sudden burst of colour it produces. Thielemann is on top form throughout, clearly engaged with the drama at every stage. The music requires continuous intervention, for tempos and balances, and Thielemann remains in tight control of everything, yet without making the music sound constricted. Other conductors achieve more breadth with this music, but for Thielemann it is all about controlled power, and keeping the music on the same scale as the voices.
That task is made considerably easier by the impressive cast that Vienna State Opera has assembled for its gala staging.  The women surpass the men, though all are impressive. Stephen Gould and Wolfgang Koch are both sounding 10 years older than in the Salzburg recording, and that translates to reduced power, especially from Koch. But dramatically, both are still convincing, perhaps even more so, and Koch’s dark sound is particularly valuable in evoking Strauss’s magical soundscape. Nina Stemme and Evelyn Herlitzius were both making their role debuts as the Dyer’s Wife and the Nurse, but both roles are ideal for their now mature Wagnerian voices. Stemme is focussed and expressive, and if Koch sometimes seems underpowered, that is only through comparison to her. Herlitzius is similarly impressive, and she and Stemme are sufficiently distinct in timbre to distinguish them in their many ensembles. Best of all is Camilla Nylund as the Empress. Hers is a properly Wagnerian soprano, and throughout the opera, you feel that she has so much more in store—a feeling wholly vindicated by her stentorian performance at the end of the third act, cleanly delineating her lines and maintaining a rare clarity of tone, even at the highest dynamics.
Orfeo’s packaging is attractive, the discs in a three-way card gatefold which slips into an outer casing. A few stills from the production are included, which show it to be a fairly traditional affair, set among classical ruins and with lots of dry ice. As well as the liner note, the booklet includes an extended introduction to the work by Strauss and a detailed synopsis by Hofmannsthal. Sadly, that is in lieu of a libretto, a serious omission given the complexity of the story. Still, given the strength of the competition, it is unlikely that anybody is going to consider this a reference version. Recommended instead for some fine singing from the female leads, especially Camilla Nylund, who is unsurpassed as the Empress.
This review appears in Fanfare issue 44:1.