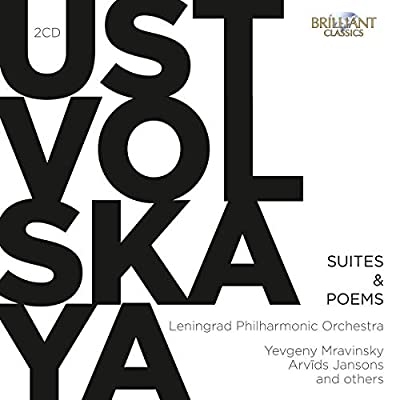 Many composers of the Soviet era led double lives—musically speaking—writing “public” music in an officially approved style for government commissions while exploring more adventurous Modernist techniques elsewhere. The level of artistic conflict between these two musical personas varied from one composer to another. For example, Alfred Schnittke held his populist film music and Modernist concert music in an uneasy balance throughout the 1960s, but the tension eventually erupted into the polystylism that dominated his concert music from the 1970s, but also resulted in a greater Modernist experimentation in his later film scores. Other composers worked the balance through with less tension: the film scores of Shostakovich, for example, or the early Socialist Realist works of Lutosławski, sit alongside their “serious” music without disturbing either composer’s musical world.

But the tension could hardly have been greater for Galina Ustvolskaya, whose austere, insistent, and brutally devotional mature style would sit uneasily with any populist aesthetic. And yet, the composer spent the 1950s and early 60s writing works in an officially approved style, as documented on this two-disc set, Suites & Poems. The liner note, by Andrei Bakhmin in excellent translation by Simon Cosgrove, tells how Ustvolskaya’s official music began soon after the Zhdanov decree of 1948. She was not personally sanctioned by the decree, but her early works grew out of the conformist culture that it created in the last years of Stalin’s rule. These works were all written to state commissions, and demonstrate the uneasy relationship between the authorities and the younger generation of composers at the time. Both Ustvolskaya and Schnittke were commissioned to write pieces to commemorate Yuri Gagarin’s space flight. But Ustvolskaya’s Symphony of the Cosmos was never written, and Schnittke’s Poem About Space was never performed. Both composers turned their backs on “official” music projects soon after, but interestingly, Schnittke had only written in a Socialist Realist style in the 1950s, while Ustvolskaya’s official projects, documented here, run in parallel with more adventurous music for the desk drawer. Ustvolskaya’s later attitude to this early music is also complex. The notes tell us that, in the 1980s, she was inclined to distance herself from all of this music, but was persuaded by her husband to include it in her official works list. She agreed, perhaps reluctantly, but only after giving several of the works more ambiguous names, those new titles appearing in brackets above.

Even at her most restrained, Ustvolskaya could not avoid controversy, and these works proved problematic. They were all performed, by their intended ensembles and conductors—including some prestigious names, as appear on these recordings: Arvīds Jansons, Yevgeny Mravinsky—but soon disappeared into obscurity. Knowing where Ustvolskaya would later go, we can hear key elements of her musical personality in these works. Her taste for insistent repetition appears here, but in warmly harmonized repeating orchestral motifs. The orchestration is fluent but favors contrast of instrumental groups over blended textures. And the simple but unyielding quarter-note rhythms that make her later music so confrontational are anticipated here in a direct and foursquare phrasing structure, giving the rhythms a provocative simplicity, even in this very direct aesthetic.

The works are arranged in roughly chronological order and begin with two works for children, Young Pioneers’ Suite (1953) and Children’s Suite (1955). Shostakovich praised the first of these in print, particularly for its orchestration, which is colorful and bright. The recordings are by the Leningrad Philharmonic in the 1950s, a fact apparent from the spectacular trumpet vibrato on the opening note. All but the last work are presented here in historical recordings dating 1954–1962, most never issued in the West: some appeared on vinyl in the USSR, and the Children’s Suite also appeared on CD in Volume 4 of the Profil Mravinsky Edition, PH18045. The remastering is dry and clean, the sound narrow but detailed, little detracting from the listening experience. Sports Suite (1959, unhelpfully renamed Suite by the composer in later life) is a live recording from 1961, but sounds no worse for it. The work’s brief, characterful movements suggest incidental music, though there is no mention of this in the liner.

The second CD begins with two substantial tone poems, Lights in the Steppe (1959) and Hero’s Exploit (1957). These larger canvases give Ustvolskaya greater scope for exploring orchestral textures, but the style is more conventional. Lights in the Steppe channels Soviet-era Prokofiev, with bright clearly delineated textures and occasional bursts of folksong. Hero’s Exploit is a more strident and somber work, again dominated by vibrato-laden brass, this time from the Leningrad Radio Youth Symphony.

The program closes with another student orchestra performance, but this one recent, Poem of Peace played by the new-music ensemble of the Moscow Conservatory. This recording was made in 2016, and was presumably the impetus for releasing the album. The music is the closest of anything here to Ustvolskaya’s mature style, with a pair of trumpets playing in close, dissonant harmonies and insistently repeating notes at the upper end of the piano. There is also a children’s choir, whose emphatic refrains dominate the work’s ending. The notes relate that Samuel Barber was present at the first performance and commented, “If this is peace, I prefer war.” What a wag.

This is a fascinating release from the ever-adventurous Brilliant Classics label. It probably needed to wait until the composer’s death, given her ambivalence about her early works. And she was right that this music has little intrinsic value on its own terms. But the recordings are certainly of historical interest, giving a broader picture of this paradoxical but increasingly popular composer.