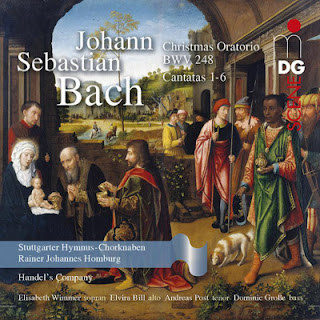 This recording of the Christmas Oratorio is the latest in a series of collaborations between the MDG label and the Stuttgarter Hymnus-Chorknaben. The choir is a children’s and youth ensemble, the top parts boy trebles, the lower voices young adults, up to the age of 25. The choir is affiliated to the Stuttgart Protestant Church and is modelled on the Thomanerchor in Leipzig and the Kreuzchor in Dresden. They are accompanied by Handel’s Company, which seems to be a scratch period band, founded by the choir’s conductor, Rainer Johannes Homburg, and by the Trompetenensemble Wolfgang Bauer, who have a great deal of solo work in the piece.

On the face of it, an all-male youth ensemble could hardly be more authentic for Bach’s choral music, but the sound is a very long way from what we have become accustomed to in recent years. The chorus is large, with perhaps 60 members in the liner photographs, so much larger than what Bach was writing for. The singers are clearly well trained, and have the natural advantage of native German fluency. But the sound is sometimes diffuse, and the chorus can wander slightly under pitch at the ends of long phrases. That said, Homburg does not make any concessions for their youth, especially with his tempos, which are in the mainstream for modern period performance, and even faster at times. The work is very much about the chorus, rather than the soloists, so it is a good choice to show off the skills of the Hymnus-Chorknaben.

The smallish orchestra—28 players—is well-balanced against the choir. The playing is at the stricter end of the period spectrum, the main advantage a solid string tone, the main disadvantage the disappointingly flaccid timpani. Wolfgang Bauer is an impressive trumpeter. He presumably plays an instrument with vent holes, given the precision of his intonation, but that’s no crime. The recording was made in a large Protestant church, the Evangelische Christuskirche Stuttgart, and the warm but uncluttered resonance is particularly sympathetic to the precise but harmonic-rich string tone. The vocal soloists are spread across the front channels of the surround array, but the chorus and orchestra are grouped in the center for a sound picture that emphasizes homogeneity over detail.

Among the four soloists, the standout is tenor Andreas Post as the Evangelist. His tone is light and his delivery conversational, which is ideal for his many recitatives. Bass Dominic Große has an attractive tone, although he is sometimes wobbly. Soprano Elisabeth Wimmer and alto Elvira Bill both bring an operatic dimension in their tone and expression. Given the all-male chorus, it was perhaps a missed opportunity not to include treble soloists. Another missed opportunity is the echo effect in the Cantata IV aria “Flößt, mein Heiland, flößt dein Namen,” where the echo soloist, Anselm Wegner (who sings beautifully) is positioned in the middle of the chorus, rather than finding a more interesting position in the surround array.

Despite the authenticity of boy choristers, the chorus itself makes this a marginal choice among Christmas Oratorios. That comes down to a matter of taste, although the occasional lack of the precision in the choral singing should be noted. Otherwise, this is an attractive offering, with the soloists and orchestra performing to a high professional standard, and the warm church acoustic providing a suitably festive atmosphere throughout. 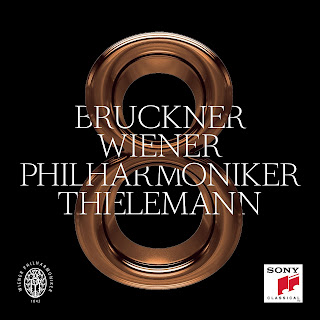 
Christian Thielemann and the Vienna Philharmonic are looking ahead, to the Bruckner bicentenary that falls in 2024. Conductor and orchestra are giving live performances of all of Bruckner’s symphonies and releasing the recordings through Sony. This Eighth Symphony, recorded at the Musikverein in October 2019, launches the project. Remarkably, this will be the first ever Bruckner cycle from the Vienna Philharmonic with a single conductor. The publicity enthuses, “The Vienna Philharmonic premiered four of Bruckner’s nine symphonies and has enjoyed a unique relationship with the Austrian composer’s music since 1873, when it gave the first performance of his Symphony No. 2.” All of which sounds like major gaslighting, given that the “unique relationship” began with the orchestra giving the Third Symphony a cursory read-through in rehearsal and then refusing to perform it. But that is water under the bridge, and, as a recent Vienna Philharmonic Bruckner reissue box set reminds us (Eloquence 4840204), the orchestra has an enviable recent history with this music, recording the symphonies under such luminaries as Abbado, Böhm, Mehta, and Solti.

The Vienna Philharmonic does not have a music director and likes to keep its visiting conductors at arm’s length. Thielemann has made several high profile recent appearances with the orchestra, most notably a Ring cycle (with the orchestra in its alternate guise as the Vienna State Opera Orchestra) and the 2019 New Year’s Day concert, one of the more successful in recent years. But part of the reason for Thielemann’s sympathy for the Vienna sound is that he has his own orchestra, the Staatskapelle Dresden, which is very similar in tone and temperament. He has recorded Bruckner extensively with them, and their reading of the Eighth is available—unfortunately for the present release—in two high definition formats, SACD (Profil 10031) and Blu-ray (C-Major 716204). The difference in timings for this recording and the Profil are negligible.

If anything, the Vienna Philharmonic is more ingrained in its Central European sound than the Staatskapelle. Both orchestras make a virtue of the rounded edges at tutti entries, and of the warm but indistinct tone of the lower brass. Vienna takes all this to another level—here it feels more like the identity of the orchestra than a regional coloring. But they also surpass all imaginable competition with the sheer beauty of their tone. The Wagner tuba chorales are sumptuous, the flutes are broad and woody, and the string sound, while diffuse, always gives breadth to Thielemann’s long lines.

Thielemann’s approach is unashamedly old-fashioned. He uses the Haas edition of the score, which has fallen from favor in most quarters, surpassed by the Nowak. The last major conductor to use the Haas was Karajan, and it was also associated with Furtwängler, who gave the first performance. Thielemann may see himself as a successor to them, but he has such an individual voice that it is hard to make direct comparisons. His reading is slow and magisterial, and, rather than increase the tempo significantly when the music builds to climaxes, Thielemann instead relies on heaver accents and darkening wind tone. The effect is suitably weighty, and makes excellent use of the trademark Vienna sound. Thielemann always cleanly delineates phrases—one of the few aspects of his art that is thoroughly modern—and where other conductors are happy for a cascading string pizzicato figure, for example, to fade back into the texture, Thielemann always gives it prominence, right up to the cadence. That sense of focused phrasing balances the more homogenous tone of the orchestra, and tuttis are always impressively unified, with the woodwind and brass tone joining the strings seamlessly. That also appears to be the goal of the recording engineers (the recording was made in-house by the orchestra), and the sound is sometimes disappointingly unfocussed. The brass at the opening of finale are husky and muffled, as is the timpani, which sounds recessed throughout.

The practical upshot of choosing Haas over Novak is that there is more music. Transitions in the third and fourth movements that Bruckner cut were reinstated by Haas. Novak keeps the cuts, to the music’s benefit in my view, and certainly in line with the more streamlined accounts that are customary today. Thielemann does not make a great case for the longer version. There is an attractive sense of calm in much of the first movement, with the dramatic episodes punctuating an often pastoral mood. The same is true of the finale, but here the music needs more shape and push, especially with Haas’s indulgent transitions.

Still, Thielemann is nothing if not consistent, and the clarity of his vision sets him apart from most of the competition in this repertoire. The account lacks tension, but not weight, and if you like Thielemann’s interpretation, it is conveyed here by an orchestra that fully justifies its legendary reputation and is always on his wavelength.