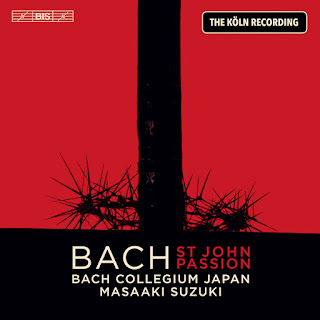 The box for this new recording of the St. John Passion states in large capital letters “THE KÖLN RECORDING,” and therein lies a tale. Suzuki and his Bach Collegium Japan were touring Europe in the early months of 2020, to mark the ensemble’s 30th anniversary. They had reached Cologne, their final stop, just as COVID-19 shut the whole project down. The plan had been to give several concerts, but in the event, only the St. John Passion could take place, and even that without an audience, the performance given by webstream instead. Finding themselves with time on their hands, the group set about making this recording. Martin Sauer, Harmonia Mundi’s master producer, was brought in at short notice, and a recording rig was sourced from Munich. The recordings were made in just three days. The details of this story are almost as interesting as the recording itself, but I won’t go into any more detail, because it is worth reading Suzuki’s own account, as given in the liner, which reads like a racy thriller, “… all the while, the coronavirus was spreading across Europe with increasing speed….”

Everything about this bizarre creation myth is vindicated by the performance and by the recording, and a sense of urgency is palpable in every bar. True to form Suzuki is fast throughout. At 8:16, the opening chorus is the fastest version on my shelf. It is also a minute faster than on Suzuki’s previous recording, BIS-1342/44, from 1999. Suzuki was no slouch in that earlier account either, but his tempos feel positively leisurely compared to here. Nevertheless, nothing sounds rushed, and the mastery of the choir and the orchestra over this music means that everything can be handled comfortably (the tour had already taken in four dates, and this is a well-rehearsed account by any standards). James Altena was disappointed by the choral singing in Bach Collegium Japan’s recent St. Matthew Passion (Fanfare 44:1), but I think he will find their performance here more engaged and focused.

The recorded sound deserves special mention, and elevates this recording to at least the equal of the recordings made by the BIS team at the chapel of the Kobe Shoin Women’s University. The acoustic is different, of course, just as warm but more evenly rounded and less ecclesiastical. Martin Sauer takes a different approach to the choir, creating a more blended sound. You have to listen out more for the counterpoint—it is still all present, just not as cleanly delineated. The orchestra, on the other hand, is recorded in gratifying detail. I wonder if Suzuki would have used a larger string section if he had been recording at home. Here there are only 11 string players, including gamba. But the tone is warm and unified, and well balanced against the chorus. The continuo is particularly impressive in the mix. Sauer doesn’t isolate the harpsichord in the center channel the way the Japanese BIS recordings do, but he always finds a way to bring out its gentle arpeggios, even in the chorales. Among on the orchestral players, the flute and oboe obbligatos deserve special mention, the oboes standing just outside of the string textures, and the flutes blending seamlessly with the chamber organ.

Among the soloists, the most impressive performance is from James Gilchrist as the Evangelist. I associate his light, English tone more with the Bach performance tradition in the UK, although I see that he has also sung the Matthew Evangelist for Ton Koopman. Here, that light, expressive tone is ideal for the modest scale of the performance, and Suzuki is happy for him to take his time with the recitatives, none of which are faster than the norm. The other soloists are all a known quantity from Suzuki’s recent recordings. Hana Blažíková expertly balances her florid vocal timbre against Suzuki’s Baroque rigors. (Male) alto Damien Guillon has an attractively reedy tone, and a slight vibrato, which seems daring in the context. Bass Christian Immler is authoritative as Jesus, if a little hollow of tone. Tenor Zachary Wilder is the nearest thing to a weak link, sometimes struggling to maintain his tone across the line, even at Suzuki’s brisk tempos, and straining on a few of the high notes.

A few extra takes would probably have brought Wilder’s arias up to the standard of his colleagues, but if that is the only artistic consequence of the circumstances of this recording, we should think ourselves lucky. Given that Suzuki had recently recorded the Matthew Passion in Japan, it is reasonable to assume that the John Passion was next on his list anyway. But what a strange way it came about. A blessing in disguise, it seems, as any hint of routine in the Matthew is completely absent from this urgent and compelling account.