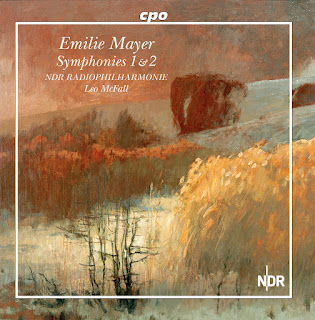 Emilie Mayer (1812–1883) is another major discovery for the CPO label. Mayer may be unique as a female composer of the 19th century who saw herself primarily in that role, rather than as a pianist who also composed. She was from Pomerania, then part of Germany, now in Poland. She trained in Stettin (now Szczecin) with Carl Loewe, before gravitating to Berlin, where she achieved modest recognition, and the publication of a small proportion of her large output. Her music was soon forgotten after her death.

Gender politics clearly play an important role in Mayer’s story, and in the motivations for reviving her music. But the picture is unusually complicated. Mayer did not shy away from large-scale forms, and these two symphonies are the first of eight she composed. That alone sets her apart from almost every other female composer of the 19th century. It is reasonable to assume that the neglect for Mayer’s music, both in her lifetime and since, is a consequence of her determination to break out of gender stereotypes, first by writing music at all, and second by writing in genres that we still subconsciously consider “masculine”. The liner note for this release, by Bert Hagels, is particularly enthusiastic about this explanation, describing Mayer as “locked in the prison of her gender.” But those arguments can be counterproductive. This music is of a very high quality, but it diminishes our listening experience to hear it as merely Mayer’s efforts to outdo her male contemporaries, to write symphonies more muscular and masculine than theirs. And, whatever role her gender played in the neglect of her music, history shows us that the music world needs no reason to exclude any composer from the canon: composers are remembered for specific reasons, and the relationship between fame and quality is tangential at best.

It is difficult to find a historical context for these symphonies, which were written in the early-to-mid Romantic era, but which owe just as much to the Viennese Classical tradition. With the First Symphony (1847) there is a good reason. It is a student work, written at the time of her studies with Loewe. The quality of the music is remarkable, especially considering its student origins—though Mayer was a late starter and was already in her mid-30s. The first movement has a particularly memorable main theme, and melodic invention is a strength throughout all of this music. The development is less convincing, just that motto played out across the orchestra in a succession of different keys. But that is a rare lapse in her inspiration. The later movements are well proportioned and elegant, but suitably emotive too. The student origins of the work explain the traditional structuring, and perhaps the reserve. But the symphony as a whole poses a bigger question—what about Beethoven? At a time when Beethoven’s symphonies were rapidly transforming orchestral music across the whole of Europe, Mayer seems indifferent to his dark psychology, extended forms, and violent outbursts. The obvious model, then, is Mendelssohn. Mayer was apparently aware of the music of both Beethoven and Mendelssohn when she composed these works, but she seems more drawn to the latter. She shares Mendelssohn’s sense of melodic invention, and his understanding of the value of melodic line, even in passages of tempestuous orchestral elaboration. The quality is not quite as high, but it is remarkably close.

The Second Symphony, tentatively dated to the same year (there seems to be a lot of speculation in Mayer’s biography), finds the composer already branching out into more adventurous Romantic textures and moods. Mendelssohn is still in the background, but there is also a hint of Weber. As in Weber, the Sturm und Drang orchestral textures are always tempered by lyrical melodic lines. And, where the First Symphony is structured in regular phrases, the music here flows more freely, with pauses and surprising gentle interludes in the faster music. The scale of the music is still modest, though no more so than in Mendelssohn symphonies. Still, this is early music from a composer who would go on to be prolific, and if she is still finding here voice, she is doing so with confidence, and any caution on her part does not seem undue.

The performances here, from the NDR Radiophilharmie under British conductor Leo McFall, are warm and sympathetic. The orchestral strings sound reduced in numbers, but the readings are certainly modern, without any concessions to period practice. It would be interesting to hear it both ways, but the modern sound plays to the music’s strengths. The recording was made in the Grosser Sendesaal in Landesfunkhaus Hannover, and the strings sometimes sound a little boxy and distant, but the woodwind tone is round and warm.

Where now for Emilie Mayer? She is not new to disc, and there have been several other intriguing releases over the last decade. CPO have previously released a disc of chamber music (555029). Capriccio are also in on the act, with a disc (5339) that couples the Fourth Symphony with the Piano Concerto (played by no less than Ewa Kupiec), String Quartet, op. 14, and a Piano Sonata in D Minor. There is also a recording of the Seventh Symphony on a Dreyer Grado CD, though that may have been deleted. Given that the Fourth Symphony recording is described as a reconstruction of that work, and the Seventh Symphony is mis-labelled as the Fifth, there are clearly some textual issues to iron out, and no doubt several of Mayer’s works are lost. But this disc is an excellent introduction to Mayer’s music, and with luck it will be the start of a major survey from this always adventurous label.