MENDELSSOHN Cello Sonatas 1 and 2. Piano Trio No. 1 (version for Flute, Cello, and Piano) 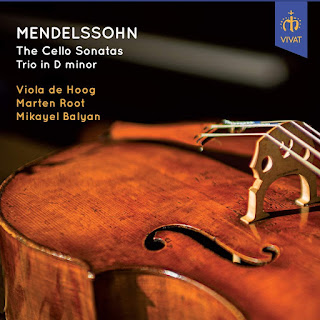 My first reaction to this recording was defensive. Mendelssohn’s chamber music is so soothing and familiar that the rigors of period performance feel like an intrusion on an intimate relationship. That feeling was exacerbated by the opening of the Second Cello Sonata, placed first on the program, with the cello sound wiry and brusque and the piano frantic and hectoring.

Fortunately, the mood soon passes, and the style starts to seem less polemical, especially for the lyricism that Viola de Hoog brings to the long-limbed cello melodies and the carefully gauged textures from Mikayel Balyan on an 1847 Érard. Mendelssohn on period pianos is hardly news, but the cello sonatas are more of a rarity. A brief internet search pulls up one other period instrument recording, from Guadalupe López Íñiguez, cello, and Olga Andryushchenko, also on an Érard. In fact, Érard was the piano of choice for Mendelssohn, and an essay in the liner recounts encomia from Felix, Fanny, and their father Abraham. Given how well Mendelsohn’s chamber music balances and blends on modern instruments, there is little obvious need to go back to his instrumentarium in search of answers to questions of balance or ensemble. Even so, the combination of sounds here is fascinating. The Érard has that boxy 19th-century sound and is dull in the mid-register. But it sings more freely higher up, and the bass, while also subdued, is satisfyingly solid. It can be difficult to pick out textural details in the mid-register, but Balyan compensates with florid broken chords, especially in the Adagio of the Second Sonata, but these never feel indulgent and fit well into the relatively strict tempos.

De Hoog is similarly disciplined, with little or no vibrato and tempo indulgences only at ends of phrases. Like the piano, the cello, a c. 1750 Guadagnini, responds differently in different registers. There is depth to the tone of the lower strings, but the upper register is less warm, and de Hoog always ventures there with care.

The two sonatas are separated by a real rarity, the First Piano Trio in a version for flute, cello, and piano. The arrangement was made by Mendelssohn himself to appease his British publisher. But he was skeptical that the outer movements could be played on flute and recommended that just the inner movements by offered in this combination. Fortunately, Marten Root, the flutist here, has no such qualms. His instrument is a nine-key flute, a modern copy of a c. 1830 instrument. (The overall pitch convention for the recording is 438, which seems a meagre concession to period practice, but was probably dictated by the flute.) The Piano Trio has a very different complexion with flute rather than violin. The blend of violin and cello is disrupted, with the result that the upper line obbligatos stand out, highlighting the sheer audacity of Mendelssohn’s playful counterpoint. The combination works well in this context, but the quieter sound of the flute allows the cello to come to the fore, and the result is another showcase for de Hoog’s lyrical playing. Tempos are fast though, and this is very much a period performance. That works best in the outer movements, but of the inner two, the slow second is too fast for my taste, and the boxy piano drains the Scherzo of buoyancy, although the burbling flute is an unexpected bonus.

Robert King’s Vivat label provides their usual fine production values, with slick packaging and excellent documentation. King himself acts as producer for recordings made at the Oude Dorpskerk, Bunnik, Netherlands. The recorded sound is warm and attractive, without ever drawing attention to itself. This obviously is not the first choice for Mendelssohn cello sonatas, but it offers a fascinating new perspective on this familiar music, gently nudging our ingrained expectations and only occasionally striving to overthrow them completely.