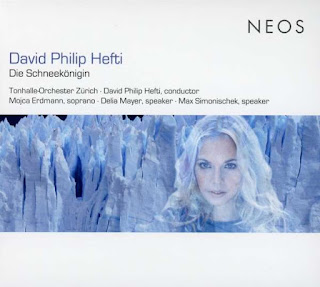 David Philip Hefti (b. 1975) is a prolific Swiss composer who is performed widely in his home country and also has a presence on the German new music scene. This album presents Die Schneekönigen (The Snow Queen), a theatrical concert work for children. The piece was commissioned by the Tonhalle-Gesellschaft Zürich, and premiered in that city in November 2018, the recording taken from the premiere performance.

With audio-only releases of music theatre works, especially of new works, you often get the impression of only hearing half the story. But Hefti weighs the drama heavily in the direction of the music, rather than the staging, so the loss is minimal. The work is scored for a soprano (Erdmann) and two speakers (Mayer and Simonischek). In the premiere performance, which is described as semi-staged, the speakers stand at the front of the stage, and Erdmann at the back, raised about the chamber-sized orchestra. The story, based on Hans Christian Andersen, tells of two children, Gerda and Kay. Gerda must rescue Kay from the enchantment of the Ice Queen, which she does with the help of a crow. Mayer takes the role of Gerda and acts as narrator, Simonischek is Kay and the crow, and Erdmann is the Ice Queen, plus several alter eros that the Ice Queen takes on over the course of the story.

Hefti’s music is modern but child-friendly. Musical evocations of ice and chill underline everything in the score, and Hefti has a keen sense for the orchestral sounds he can employ to create these effects. Icy untuned percussion plays a role, but there only seems to be one percussionist, and the composer does not overly rely on percussion sounds. More ubiquitous are the low woodwind and brass, especially the contrabassoon and bass clarinet, which are regularly employed to create sinister moods and to evoke creaking ice. The music occasionally drifts into tonal harmonic order, but for the most part is freely atonal, though usually consonant.

The German libretto is also child-friendly, which has the added bonus of making it non-native speaker friendly too. The speakers are both admirably clear (and obviously were amplified in the hall to ensure that clarity), and with a basic level of German you can follow the story. And if not, a full libretto is supplied, in German, English, and French, though not side by side sadly.

Mojca Erdmann is best-known as a Mozart specialist, and her voice is characterized by a lightness and clarity of tone. Hefti makes significant demands on her, especially in the upper register, where she regularly hangs for long stretches in quiet, fragile cantilena. The result is a narrow, unsettling tone, an icy vocal characterization ideal for the role, but not always pretty.

The composer conducts with a sure hand. Despite the modernity of the score, there are no serious challenges for the ensemble here, but the players are clearly well rehearsed and fully engaged. Packaging from NEOS is elegant, with enough stills to give a good impression of the semi-staging—the stage is dominated throughout buy a giant ice crown, from which the conductor seems to emerge. All-round, a fairly modest new-music project, but one that succeeds on its own terms.