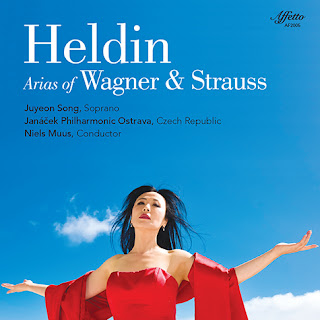 This CD, titled Heldin, is the debut album for Korean soprano Juyeon Song. She is being touted as the next major Wagner soprano, and, according to her liner bio, is “Becoming the Isolde of today….” Her age is not given anywhere in the publicity, or online, but she is certainly young to be taking on these heavyweight roles. But her career so far looks promising. She sang in a concert performance of Tristan in San Francisco in October 2019, and her publicity is filled with glowing reviews of that performance. She is also making an impression on the still-nescient Wagner scene in Eastern Europe. She sang in a concert performance of Tristan in Poland, just before her SF appearance, which led to a recording of the full opera (Navona 6321—review to follow). Like this recital, that was given with the Janáček Philharmonic Ostrava, though with a different conductor. She also sings Abigaille in Nabucco, although that, along with the roles on the present disc, seems to be the limit of her professional repertoire.

On the basis of these performances, Song has a clear and focused soprano voice. The sound can be narrow, especially in the upper register, so it is not a big sound, although she projects well above the orchestra. Her vibrato is narrow and slow, but very well controlled, with gradual increments up to the climaxes. Intonation is mostly secure, although she sometimes hits the higher notes a little under tone, but immediately corrects. Her articulation is excellent, and the texts in both the Wagner and the Strauss are always crystal clear—and sufficiently idiomatic to please my admittedly non-native ear. My only major concern is a lack of character. The singing is certainly passionate, but the style and sound hardly change from Brünnhilde to Isolde to Salome.

The program is short, and some of the excerpts are needlessly stingy. The “Hojotoho!”s from Walküre are given a two-minute slot, which seems to begin and end mid-way through orchestral phrases. But the Götterdämmerung and Salome excerpts run to the end of the respective operas (Hagen’s final interjection is omitted) and between them make up the bulk of the program.

The Janáček Philharmonic Ostrava is a bit rough round the edges but plays with passion and commitment. Conductor Niels Muus seems to find more musical interest in the Strauss excerpt than in the Wagner, and makes the most of the colorful woodwind and percussion writing there. Balances are fine, with Song recorded close-up for the Wagner but sounding a little more recessed in the Strauss. Documentation is cursory, mostly given over to the singer’s bio. All round, a promising debut, if sometimes underwhelming on its own terms. The standout performance here is the Liebestod, so the full Tristan recording may offer greater vocal riches.

This review appears in Fanfare issue 44:4