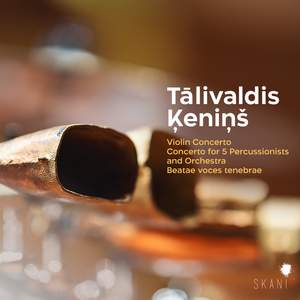 
Tālivaldis Ķeniņš (1919–2008) was a Canadian composer of Latvian birth. He was a prominent figure in Canadian music, teaching at the University of Toronto and writing works for many Canadian ensembles. Ķeniņš left Latvia in the 1940s, fleeing the Soviet occupation. But the country remembered him, and many performances of his music have been given there since the fall of the Soviet system. This album is the first offering on a new label, Skani, from the Latvian Music Information Centre. It offers diverse perspectives on Ķeniņš’s art with a skillfully performed program of his orchestral works.

Before moving to Canada, Ķeniņš studied in Paris, including with Messiaen at the Paris Conservatory. A French influence is clear in all this music, especially in Ķeniņš’s fluency with orchestral color. That Impressionistic side stands in opposition to his Neoclassical tendencies, towards order and clearly defined forms. The result is an expressive but sometimes acerbic style, the music often moving into terse, percussion-led textures, but never sustaining that tension for long, and subsiding instead to calm, lyrical lines, these clearly the composer’s lingua franca.

The Violin Concerto dates from 1974. It was written for Steven Staryk, who, fortuitously, was a neighbor of Ķeniņš in Toronto. The solo writing is initially angular and rhythmic—shades of Bartók here—but soon settles into a more relaxed lyrical style. Ķeniņš’s taste for proportion and order is apparent from the work’s five-movement arch form, another Bartók trait. But there is rarely any sense of urgency or progression in this music, and Ķeniņš is always happy to luxuriate the textures he invokes. Violinist Eva Bindare gives a suitably focused reading, gritty and terse where required, but lyrical for the long melodies. Her viola-like tone in the lower register is particularly attractive, and Ķeniņš’s careful scoring ensures she is never swamped.

The Concerto for Five Percussionists and Orchestra dates from 1983 and was written for orchestra and soloists from Ķeniņš’s department at the University of Toronto. The composer evidently had a passion for untuned percussion, which dominates the orchestra in the Violin Concerto too. But the Percussion Concerto is a different work entirely, the style much more consonant and neo-Romantic. Although there are five percussion soloists, the balance of the work leans heavily towards the orchestra, with the expanded percussion usually prominent but rarely the focus of the musical argument. The soloists do get a chance to shine, though, in occasional duets between percussion and orchestral soloists, such as the xylophone and piano passage at the start of the scherzo third movement (this concerto is also in a five-movement arch form).

The program closes with Beate voces Tenebrae, an elegiac orchestral work from 1977. The music gradually grows from low, sustained textures, and even though it builds to imposing climaxes, again with plenty of percussion, the mood is somber and restrained throughout. Fragmentary quotations appear, from Bach, Beethoven, and Liszt, but as nebulous reminiscences within the music’s dreamlike atmosphere. This is an intriguing work, although, as in the Percussion Concerto, the Romanticism can be cloying, especially compared to the clean orchestral lines of the Violin Concerto, a style to which Ķeniņš seems more naturally drawn. Here, and throughout the program, the Latvian National Symphony Orchestra plays well under Andris Poga. Ķeniņš’s orchestral textures are often innovative, but are always presented with clarity and warmth by the players. The recordings were made in the Great Guild Concert Hall in Riga, presumably under studio conditions. The orchestral sound is a little recessed, but the fine balance against the soloists compensates for any distancing.

The music of Tālivaldis Ķeniņš has previously appeared on several Canadian labels, mostly in chamber music compilations (omit the diacritics if you are searching online). Paul Rapoport, a champion of Ķeniņš’s music, reported in Fanfare 8:4 that a recording of the Violin Concerto by Staryk was still (in 1985) available on the CBC label, but it is out of print now. If the Latvian state agencies are planning a broader reappraisal of Ķeniņš’s work, there is plenty of orchestral pieces to explore, including eight symphonies and 10 more concertos.

This review appears in Fanfare issue 44:4.