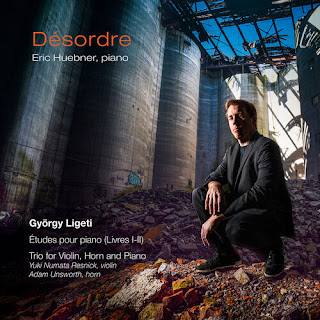 This album of Ligeti’s Études pour Piano, named Désordre after the opening number, is a collegiate project from the University at Buffalo. Pianist Eric Huebner is a new music specialist. He is also pianist of the New York Philharmonic as well as associate professor of music at the university. The recording was made there, at the Lippes Concert Hall, and supported by the Music Department. Huebner has previously appeared as ensemble pianist of many new music recordings, and this seems to be his third solo album, after a program of music by Daniel Rothman on Albany (967) and a recital of Schumann, Stravinsky, and Carter, like this one on New Focus (159).

Ligeti’s Études are now well established in the repertoire. The First Book was completed in 1985 and was soon recorded on Wergo by Volker Banfield (60134). After the Second Book was completed, in 1994, the first recording of the two together was made by Fredrik Ullén on BIS (783). Around that time, Ligeti was in collaboration with Sony on their György Ligeti Edition. This aimed to present all of Ligeti’s music in definitive, composer-approved interpretations. The Piano Études were recorded by Pierre-Laurent Aimard (62308), a recording that has easily retained its definitive status, despite stiff competition in more recent years from pianists as venerable as İdil Biret (Naxos 8.555777) and Jeremy Denk (Nonsuch 530562).

The music demonstrates Ligeti’s fascination in the 1980s and 90s with chaos and order, and with the then-fashionable mathematical theories that presented the concepts as two sides of the same coin. So, in the Études, the two hands are often running at different tempos, or in different modes, creating complex cross-rhythms in which the ear picks up traces of a higher order. The trick for a pianist is to maintain that ambiguity, to present the interacting rhythmic hierarchies as part of a bigger picture in which rigid musical order is both an essential and a compromised ingredient.

Eric Huebner is particularly good at bringing out the details of this music. For instance, in the First Étude, each hand plays a theme in octaves accompanied by running eighth notes between. The right hand plays white notes and the left hand black notes, and the theme and accompaniment textures in the two hands gradually move out of synch. Huebner gives us immaculate clarity in those two-part textures, maintaining the structural hierarchy within each of the hands, and setting off the interaction between them like a well-oiled, but always percussive, mechanism. The result is more order than chaos, and so the effect can feel corporal and earthbound. Aimard smoothes the eighth-note accompaniment into a flowing, even texture, and the result is more nebulous. The sound recording here, by Adam Abeshouse, also adds to this sense of clarity and order. The piano is recorded up-close, with a welcome sense of immediacy, but it lacks weight in the bass register. The result is greater focus, but less drama. All round, it is a more mathematical approach, which is reasonable, given the mathematical inspiration of most of this music. It works best in the fast movements—which is most of them. The slower Études need more atmosphere. Ligeti described the Fifth Étude, “Arc-en-ciel,” as a jazz piece, but you wouldn’t know it from Huebner’s staid account. The slow number in Book 2, “En Suspens,” is more successful, as this time Ligeti creates the placid mood from judicious application of the cross-rhythms at which Huebner always excels.

The program is a curious mix. Ligeti wrote four numbers for a projected Third Book of Études, but these rarely get included in recordings, and do not appear here. In fact, only one of those four late Études is fast, so Huebner is probably right to avoid them. There is also enough early music for solo piano to complete a program, as both Ullén and Aimard did, though this is so far from the Études stylistically that it is not an obvious coupling. Instead, we get the Horn Trio, a much more stylistically aligned work, written just before the First Book of Études, in 1982. Huebner is joined here by violinist Yuki Numata Resnick and hornist Adam Unsworth, both of whom are clearly on the pianist’s wavelength in terms of clarity and precision. Resnick plays with little vibrato, and her penetrating tone in the upper register cleanly delineates the textures, which are otherwise often in a veiled alto register in both the piano and the horn. Abeshouse again mikes the instruments closely, and the sound of the horn can be boomy, especially in the lower register. But the pay-off, again, is exceptional clarity, in a reading where detail and precision are clearly of the highest importance to the musicians.

Ligeti’s music of the 80s and 90s can be heard as transitionary, from the high Modernism of his earlier work, to a late style more influenced Ligeti’s Hungarian roots, and especially by Bartók. The liner essay, by Nicholas Emmanuel, a grad student at Buffalo, highlights those Hungarian connections and provides valuable context for all of this music, a context that is only now coming into clear perspective, 15 years after the composer’s death. But the performers take the opposite approach, highlighting the Modernism and mathematical rigor of the music. The results sometimes lack atmosphere, but the performances are always engaging, thanks to Huebner’s skill in playing out Ligeti’s complex rhythmic games.