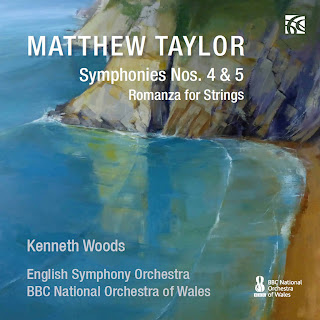 
The conductor Kenneth Woods has been devoting much of his time and energy in recent years to his “21st Century Symphony” project, a commissioning scheme to support the British symphony as a contemporary medium. This new release from Nimbus presents the latest symphony from the project, Matthew Taylor’s Fifth (2018) along with his recent Fourth Symphony (2016). The two works form a contrasting pair and offer a range of insights into Taylor’s art.

I first came across Matthew Taylor as a conductor. A monumental recording project by Hyperion to record the complete symphonies of Robert Simpson, conducted by Vernon Handley (box set Hyperion 44191/7) was interrupted by Handley’s death, before he could record the 11th Symphony, the final work in the cycle. Taylor took up the baton, and his account of Simpson’s 11th matches the high standards that Handley had maintained throughout the earlier recordings. In fact, I hadn’t made that connection until I started listening to Taylor’s Fourth Symphony, which instantly reminded me of Simpson’s style—and Simpson’s music is certainly a fine model for any contemporary symphonist. Taylor shares Simpson’s sense of architecture and symphonic scale. He also uses several orchestral devices that hark back to Simpson’s work: percussively accented repeating-note figures in the high violins, chords gradually accumulating around a central pitch, especially as accreting dissonances in the brass. But Taylor’s music feels more focused and more tightly structured. It is symphonic in the sense of closely argued interaction of themes as much as in its breadth. There is humor too, and, like Simpson, Taylor reveres Haydn, whose influence here serves to lighten the discourse, with the textures often moving over to lighter woodwind sounds.

Woods characterizes the Fourth and Fifth Symphonies as a contrasting pair, the Fourth as bright and energetic, the Fifth as tragic. Despite Taylor’s apparently traditional approach to symphonic form, the Fourth Symphony is in three connected sections, while the Fifth is the composer’s only symphony to employ four movements, and even here in an unusual configuration. The scale and mood of the Fourth Symphony are apparent from its bright, woodwind-saturated opening—shades of Petrushka, or of Ravel in the same era (curiously, Taylor does not seem to be influenced by any British music prior to Robert Simpson). The symphony opens strongly, but some of the later music gets weighed down by the composer’s structural ambitions. The development section of the first part is based on the idea of increasing intensity while maintaining a single tempo. This idea is taken from Simpson’s Ninth Symphony, but here fits uneasily with the more traditional structure, impeding the flow of the music. Fortunately, Taylor finds his form again at the end of the first part, where a climax of dissonant brass gracefully recedes until only a solo harp is left to conclude. The second section, Adagio teneramente, is lyrical and somber. Despite Taylor’s broadly tonal language, and his largely traditional orchestration, he studiously avoids Romantic excess. The result here is music that is expressive and expansive, but without ever feeling sentimental or overwrought. Nielsen is mentioned several times in the liner note, and his balancing of personal expression with Neoclassical efficiency is clearly a model of Taylor’s slow movements. The Finale buffa takes us back to Haydn, or at least Haydn via Robert Simpson, the music scuttling and bright, often dominated by percussion, but always playing out on a suitably symphonic scale.

The filler between the two symphonies is Romanza for strings, an arrangement of the slow movement of Taylor’s Sixth String Quartet, written for his wedding in 2006. It is a less ambitious work, but the voicing of the textures in the string parts is always elegant, and the breadth of the unfolding melodic line sits well with the two symphonies.

The Fifth Symphony is written for a smaller orchestra, but is, if anything, more dramatic and intense than the Fourth. Taylor tells us that the first movement was an attempt to recreate the energy and rhythmic focus of the first movement of Beethoven’s Fifth. The music doesn’t sound much like Beethoven, but the idea of continuous momentum is felt in the way that the melodic ideas are passed around the orchestra, that sense of pace taken up by each instrumental group in turn. The movement builds to a climax dominated by overlapping trumpet calls—the brass throughout this work creating an illusion of larger orchestral forces—before a manic timpani cadenza brings the movement to a decisive, if fraught conclusion.

The second and third movements are short interludes for reduced orchestral forces. Taylor relates this idea to Brahms, but the music is more Impressionistic than that comparison suggests. The fourth movement is a large-scale Adagio. Mahler is obviously mentioned as a source, and the music here engages with the sullen, somber sonorities of Mahler’s Ninth and 10th Symphonies. But, as in the slow section of Taylor’s Fourth, the music’s often intense expression never gives way to sentimentality. The ending is particularly dark, a string threnody cut short by a single minor chord from the trombones—an unusual conclusion, but it works.

Kenneth Woods gives impressive readings of these two symphonies. That ending to the Fifth requires a real feeling for the music’s sense of muted drama, and Woods knows exactly how to handle it. He also has a good feel for Taylor’s expressive, but not overtly Romantic milieu, and for the long lines that articulate his structural thinking. The Fourth Symphony was recorded with the BBC National Orchestra of Wales at Hoddinott Hall in Cardiff, and the Fifth with Woods’s own English Symphony Orchestra at St. Jude’s on the Hill, London (just before the premiere, also in London). The BBC National Orchestra of Wales comes across as the superior orchestra, especially for the unity of their strings, although the vibrant brass tone of the English Symphony Orchestra is a real asset in the Fifth. The recorded sound from Cardiff is better too, through the church resonance is also attractive for the Fifth. A fascinating release, and another success for Kenneth Woods’s “21st Century Symphony” project.