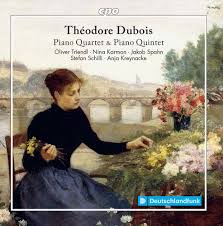 
Posterity is rarely kind to conservative composers, and Théodore Dubois (1837–1924) was as conservative as they come. He was primarily a church musician, most notably as organist of the Church of the Madeleine, where he succeeded Saint-Saëns in 1877. He is best remembered today for his organ music, but even that has only a limited following, and exclusively in France. But he was prolific too in opera, orchestral, and chamber music. In the 1870s, he was one of the founders of the Société National de Musique, the aim of which was to sperate the French music of the day from German influence. He was also an important teacher, particularly of counterpoint, on which he wrote a treatise. From 1896 to 1905, he was director of the Paris Conservatory. This tenure secured his reputation as a staunch conservative: he was forced into early retirement after attempting to use his influence to deny Ravel the Prix de Rome, on account of Ravel’s Modernist tendencies. The French government appointed Fauré in his place, a small but important step in aligning the establishment with the new trends in French music.

These two chamber works date from the time of that scandal, the quintet from 1905 and the quartet from 1907. They are very much in the style of the earlier generation. The style resembles that of the (similarly obscure) chamber works of Saint-Saëns, and, but for Dubois’s staunchly conservative harmonic palette, Fauré too. Dubois’s background in church counterpoint is everywhere apparent, and in almost every movement, we are presented with an attractive melody, which is then woven into contrapuntal textures. Dubois knows how to handle his instruments, and the textures are always clear and bright. That devotion to counterpoint is the most endearing aspect of Dubois’s conservatism—the downsides are his strict adherence to Classical forms and, most frustratingly, his unimaginative and overly emphatic cadential formulas.

The quintet is written for an unusual combination—piano quintet, but with oboe in place of the second violin. And it is very much the second violin rather than the first that has been replaced, with the violinist clearly leading the ensemble, and the oboe an added color. For much of the work, it is unclear why the substitution has been made. In the first movement, contrapuntal textures typically begin with the violin, then followed by the oboe before cascading down into the lower strings. But the oboe is put to better use in the Adagio non troppo third movement, often given the lyrical melody over string accompaniment. The quartet is for the traditional piano quartet instrumentation, but again, Dubois’s use of the available instrumental combinations is the most interesting aspect of the music. He is particularly generous to the viola in terms of solo turns and melodies, and the cello is also regularly highlighted. These lower-string textures occasionally call to mind Elgar—though the common link is most likely the reluctant but inevitable influence of Brahms.

This release is the second in a series from CPO dedicated to Dubois’s music; it follows a 2018 album which featured the Violin Concerto (CPO 7779322). Despite the apparent obscurity of this music, it is all available on other recordings, and a 2007 ATMA album offers the same program (ATMA 22385). Both versions are highly attractive, with the Quebecois Trio Hochelaga and friends a little more laid back on the ATMA release and the German players assembled here more energetic in the counterpoint. But there is little to separate the two versions. As on many CPO releases of obscure chamber music, the key figure here is pianist Oliver Triendl. He and his colleagues are presented in a generous, warm acoustic, which enhances the resonance of the oboe and gives some real presence to the lower strings. All round, an attractive recording, even if the music itself is inconsequential, and already available elsewhere in similarly fine accounts.