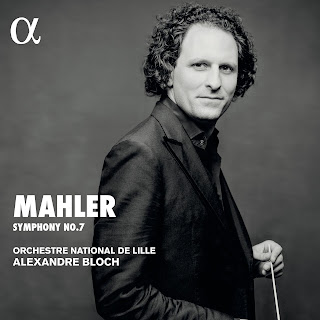 Mahler’s Seventh is a problem child, but that makes it an enticing challenge for conductors. The music is wildly divergent, with regular and radical changes of tempo and mood. And Mahler’s unusual structuring means that conductors have few conventions to fall back on. But when it works, it is a triumph, the finale one of Mahler’s few unclouded expressions of joy, concluding in a triumphant blaze of C Major. Gustavo Dudamel took up the challenge in 2013, touring European orchestras with the work. His strategy was to play down the music’s excesses, to rely on orchestral color rather then extreme rubato to project the music’s garish side, while keeping tighter control on tempos and dynamics. I heard him on that tour with the Philharmonia in London, and got the impression that he was trying to move away from his reputation as enfant terrible and project the image of a mature conductor instead.

Alexandre Bloch is 35, and this Mahler Seven is only his fourth commercial recording, suggesting that similar motivations are in play. Bloch is currently music director of the Orchestre National de Lille, whom he conducts here, as well as principal guest conductor of the Düsseldorfer Symphoniker, having previously held a similar position with the London Symphony. His repertoire to date has been dominated by French composers, which again makes the Mahler Seven sound like a brave step.

He clearly has a close and constructive relationship with the orchestra, which he has led since 2015, drawing fine playing from the musicians and maintaining tight ensemble. But, like Dudamel, he gives a cautious reading of the work. Tempos are well within established conventions, and he rarely takes up Mahler’s invitations to sarcasm or excess: The string portamentos are delivered but not dwelt on, and the instruction Mit grossem Schwung elicits greater pace but no swaggering rubato. The result is a highly accomplished reading, and one that finds all of the structural logic in the score (it’s there if you look for it) as well as all the radiant joy in the outer movement climaxes.

This release appears just a few months after Osmo Vänskä’s account in his ongoing Mahler cycle with the Minnesota Orchestra (BIS 2386). Vänskä outclasses Bloch, but both have their merits. Vänskä can rely on the enhanced soundstage supplied by BIS’s SACD sound, and you hear that right from the opening string accompaniment figure, which has depth and resonance for Vänskä. Bloch treats it just as a background effect. Similarly, the “Nachtmusik” movements are all atmosphere and flickering shadows from Vänskä, while Bloch tends to be brisker and more rhythmic. But, again, Bloch’s reading is well within the spirit of the music, and the details he is able to highlight in Mahler’s intricate scoring always ensure interest from one moment to the next.

Vänskä has the superior orchestra too, but not by much. I prefer Bloch’s tenor tuba (Lilian Heurin) to Vänskä’s (R. Douglas Wright), but that’s just a matter of taste—Heurin has less vibrato. For the rest of the brass section, the Lille orchestra can’t compete with the solid sound from Minnesota, and the sometimes flaccid timpani also lack punch. But the string sound of the Lille orchestra is bright and attractive. The strings are nimble too, allowing Bloch to negotiate some abrupt tempo changes without breaking the continuity of the line.

This new Mahler Seven is a credit to both Alexandre Bloch and his Lille orchestra. In a work that trades in contrasts between darkness and light, night and day, Bloch gives us an energetic account that emphasizes the brightness of its many ecstatic climaxes. That is an attractive proposition, and should go some way towards securing the symphony’s still precarious status in the canon.