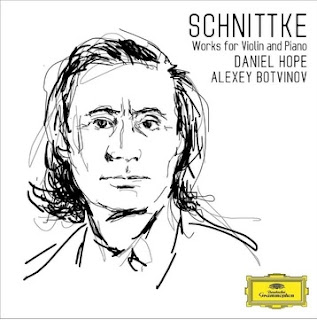 
This new recording of Schnittke’s violin music brings Daniel Hope full circle. The violinist has had a long relationship with Schnittke’s music, and his introduction was hearing a performance of the First Violin Sonata in 1989. Ten years later, Hope made his first commercial recording, an ambitious program for Nimbus that included the orchestral version of the First Sonata (along with Weill and Takemitsu, Nimbus 5582). That is the work that he returns to here, but in its original form, for violin and piano. Hope’s second recording for Nimbus also included Schnittke, the Third Sonata (5631), and in 2004, he went on to make the first ever recording of Schnittke’s Sonata No. 0 (Warner 2564 61329-2), a student work from 1955 that was only published that year. In the years since, the violinist’s star has risen rapidly, ensuring that this new recording, for Deutsche Grammophon, is a major event.

The First Sonata is an early work too. It dates from 1963, early in Schnittke’s serial phase. The sonata is an exercise in tonal serialism. Each of the four movements is based on a different series, but all are constructed of stacked thirds, allowing the composer to create triadic harmonies. Stylistically, the music is a short step beyond Shostakovich, and there is also some Prokofiev in the mix; the flageolet ending to the third movement closely resembles the ending of Prokofiev’s Five Melodies, op. 35bis. But Schnittke takes advantage of his tight serial/tonal construction to set each of the movements in different style and mood. It is an attractive and engaging piece all round, though historically it has suffered for being overshadowed by the composer’s Second Violin Sonata (1968), a manifesto for his later polystylism and undoubtedly one of his most important works. Even so, the First Sonata is well represented on disc, with 17 other versions currently available. The most important of these is the version by Mark Lubotsky, for whom the work was written (Ondine 800), but the more obvious competition is from Roman Mints, whose two-disc release in 2016 (Quartz 2116) presents all of Schnittke’s works for violin and piano in superlative performances.

Everything about Hope’s account is large-scale—expressive and Romantic. He and pianist Alexey Botvinov are presented in a generous, resonant acoustic, which suits their approach well. The tempos are generally slower than in the Mints recording, but Mints seems closer to the norm, while Hope is pushing the boundaries. It is a compelling account, and Hope’s passion for this music is clear from every phrase. The resonant acoustic contributes to the sense of atmosphere, but ultimately that comes from the players. The feeling of claustrophobia they illicit from the slow introductory movement never completely disappears, even in the faster movements later on. The second movement, Allegretto, feels tentative and nervous, but is also given a sense of groundedness and weight through Hope’s rich, earthy tone. Mints sounds lighter and more nimble, and a little more varied in his tone and textures, a modern account in comparison to Hope’s more Romantic reading. That said, Hope takes the flageolet ending of the third movement surprisingly fast—the one moment we would expect him to linger—and the fourth movement, Allegretto Scherzando, is brisk too. There are several passages with weighty bass textures in the piano here, and Hope and Botvinov are wise to lighten their approach here to keep the music buoyant.

Hope has said in interviews that he thought hard about the programming for this disc, but the result seems chaotic, as if it was decided by committee. The Suite in the Old Style is placed first, and the sonata is surrounded by a group of five short, occasional pieces. No claims are made for comprehensive coverage, but even so, it is strange that the Second Sonata is not included, especially as it is the only major violin chamber work by Schnittke that Hope has yet to record. Presumably, this reflects a concern that the Second Sonata might overshadow the First, which is clearly the main object of Hope’s affections here. The varied program does have the advantage of including many aspects of Schnittke’s diverse output, early and late, serious and flippant.

The Suite in the Old Style is even more popular than the First Sonata, and Mints was wise to present it on his album in an unusual arrangement for viola d’amore, percussion, and harpsichord. Stylistically, the piece is a conundrum. It is based on music that Schnittke wrote for two films, Adventures of a Dentist (1965) and Sport, Sport, Sport (1970). The “old style” alternates between Baroque and Classical, the contrapuntal textures suggesting Bach and the dance movements Mozart. But Hope and Botvinov again take a broad, Romantic approach. There is no sarcasm here, no telling nods towards modernity; they play it straight. It works fine, and the sheer technical accomplishment of the composition allows it to stand on its own musical merits. Again, there are many moments of quiet introspection in this account, but they never last long, and the propulsion of the underlying rhythms is well maintained. The effect is to bring the music closer to how it originally sounded on the film soundtracks, from a time before historically informed practice put a question mark against even these fleeting allusions.

The short works are all played with gusto. There is more film music, the Tango from the film Agonia (1981), which also appears in the Concerto Grosso No. 1 and the opera Life with an Idiot. The Polka is taken from Schnittke’s incidental music to the play The Census List, while the Gratulationsrondo is another neo-Mozart pastiche. All of these works have catchy tunes, and Hope again plays them with feeling and without irony. Roman Mints takes the opposite approach. He exaggerates all the gestures, so that the Polka becomes bitingly ironic, and the Gratulationsrondo insipid and kitsch. I prefer that approach in these short works, but again, when Hope plays them straight, the sheer technical skill with which the music is constructed still makes for a satisfying experience. Madrigal in Memorial Oleg Kagan is a late work for unaccompanied violin. There is a Webern-like transparency about the work, which is well balanced by Hope’s resonant sustained sound. As with his 2000 recital disc on Nimbus, Hope again ends the program with Stille Nacht, a disturbingly dissonant take on Silent Night. I find the humor here dark, and it makes for an unsettling conclusion (Mints ended his program with the upbeat Polka). But Hope clearly feels differently, as is apparent from his naively sentimental reading, again in stark contrast to the bleak and chilling account from Mints.

This high-profile release is clearly a major addition to the Schnittke discography, even if there is plenty of competition for all of these works. Hope and Botvinov offer distinctive accounts and demonstrate that this is music that benefits from performers who can project a musical personality. They are most successful in the First Sonata, which is the meat of this program, even if DG would rather have us focus on the more popular Suite in the Old Style. Perhaps the performers were leaned on by A&R to include the Suite, and the shorter pieces too. Either way, it is all played with passion and is highly convincing. And while the omission of the Second Sonata is curious, it leaves the door open for a sequel, which would be welcome indeed.