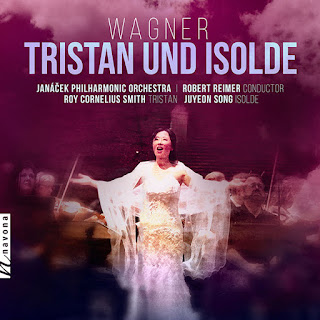 The unassuming packaging for this release—a three-way card gatefold—belies the remarkable recording within. This is a live concert recording of Tristan und Isolde, made in southern Poland with a Czech Orchestra and a predominantly American cast. The whole project was underwritten by the Claude Heater Foundation (founded by the American Heldentenor), whose aim seems to be to provide a platform for Korean soprano Juyeon Song. That is does, and Song gives us an excellent Isolde. The rest of the production is serviceable, with a nimble orchestra and with only a few weak links in the cast. A surprisingly candid note from conductor Robert Reimer in the packaging concedes that rehearsal time was tight, and that is sometimes apparent in the ensemble, but the results are always listenable, and very often thrilling.

Juyeon Song has a bright tone and good support. She is a little lacking in color, especially at the top, but all the notes are there. The microphones may have been positioned to favor her, and there is never any danger of her being overwhelmed. Tenor Roy Cornelius Smith is a good match as Tristan. His voice is round, although he can tend towards a hollow sound at the loudest dynamics, and, while forceful, he lacks the sheer vocal power that the role demands. Brian Davis is a solid Kurnewal (he also doubles as Steersman), rich and focused. Tamaro Gallo is less impressive as Brangäne, her tone loose and uneven, especially at the top. Alexander Kaimbacher is a characterful Melot, and also takes on a handful of compiramrio roles. John Paul Huckle brings gravitas to the role of King Marke. His voice has the presence and weight that much of the cast lack, though he has a frustratingly loose vibrato.

Robert Reimer leads a swift and efficient account of the score, which fits snuggly onto three CDs. His tempos are steady, and he is cautious with rubato, although the big climaxes are given their due. The orchestra plays well, and the string soloists are all impressive, though the woodwind solos are dull. Also, the tutti strings are dry, with a lack of bloom to the sound.

That might be a consequence of the sound recording, which favors some of the performers over others. Both Song and Smith are miked closely, but many of the other singers sound distant, and the boomy acoustic of the venue, the Krzysztof Penderecki European Centre for Music in Lusławice, is not adequately tamed by the engineers.

As mentioned, the packaging for this release is skimpy, and you could be forgiven for mistaking it as an excerpts album. The printed material runs to bios for conductor and cast and production credits. There’s no libretto, of course, but nothing about the opera itself either. This is an attractive recording, although hardly competitive, but worth hearing for Juyeon Song’s impressive Isolde.