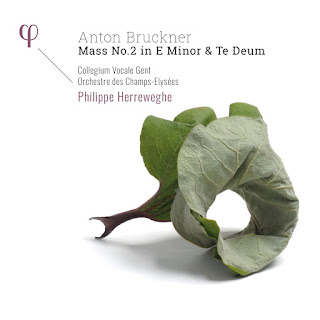 
Philippe Herreweghe brings a period performance perspective to Bruckner’s sacred music. Tempos are fast and the choral tone is pure and largely vibrato free. This has the effect of taking the Mass in E Minor back to its Renaissance roots. The plainchant is included before each movement, and the music that follows retains a chant-like simplicity and directness. Comparison with other recordings demonstrates just how radical Herreweghe’s tempos are. The first movement, for example, times in at 5:36, where most other recordings are over 7 minutes. But on its own terms, the performance works fine, and never sounds rushed. This is Herreweghe’s second recording of the work. The first was released in 1990 (Harmonia Mundi 901322). It has slower tempos than the new recording (that Kyrie is 6:33) but is also more traditional for having a smaller choir in a more reverberant acoustic. The new recording is from the Philharmonie Essen, and is miked close, without any pretense to a church acoustic. That gives Herreweghe license for his fast tempos, but the overall effect is a feeling of clarity and directness. The chorus is relatively large, but their intonation is impressively precise, and a work that tends towards a wash of sound in other recordings here retains a valuable focus on melodic contour and polyphonic texture.

The Te Deum is a larger work, and Herreweghe takes a more expansive approach. The choir is expanded, and a substantial orchestra is employed. The recording venue this time is the Lucerne Culture and Congress Centre, but without reading that in the booklet, you would imagine a church setting. This time the microphones are distant and the textures are more homogenized. Despite its size, the orchestra sounds dry, and the organ has very little presence. The soloists bring a more Romantic sensibility, and Herreweghe is surprisingly supple in his accompaniment to the solo numbers. Even so, this is another fast reading, with Herreweghe again relying on the precision of his ensemble to articulate Bruckner’s textures. The faster tempos mean that rhythmic propulsion can be maintained without emphatic accents from the brass, especially in the Aeterna fac. The result is a suitably imposing edifice, but without the Gothic tinges that usually accompany the work.

Herreweghe is clearly a revisionist when it comes to Bruckner, but he also avoids the worst excesses of HIP conductors in this repertoire. His tempos are fast, but never rigid, and the singers never sound rushed. The Mass sounds austere, partly due to the dry recorded sound, but rather than sparsity, the effect is of an increased sense of devotion. That is true of the Te Deum as well, although here Herreweghe seems to be battling against the music’s Romantic sensibility, at least in the tuttis. It all adds up, thanks to the precision of the choral singing, but while the choral sound validates the Mass, in the Te Deum it seems more like a substitute for the grandeur we have come to expect.