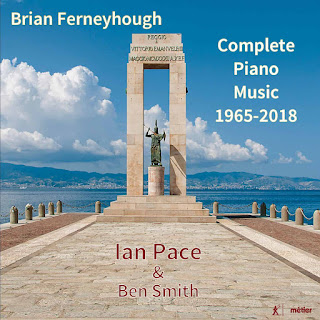 
Brian Ferneyhough has a fierce reputation, but that belies the sheer variety of moods and textures in his music. The New Complexity movement, of which he is the figurehead, is more famous for the visual density of the notation employed than for the actual sounds that result. Listening to this survey, Compete Piano Music 1965–2018, it soon becomes clear that the amount of ink on the page of a Ferneyhough score is more the result of complex proportional relations than of actual notes per minute. His music can be fast and chaotic, but just as often, the complex tuplet notation is actually performed at a slow tempo, and instead we hear glistening resonances, continually transferred across the various registers of the piano.

Ian Pace is a contemporary music specialist, both as pianist and academic—he is reader in music and head of the music department at City University, London. His academic approach is everywhere apparent on this album. Rather than front-load the program with Ferneyhough’s most famous piano work, Lemma-Icon-Epigram (1981), he presents the music in chronological order. And the self-authored liner note is an in-depth discussion of the performance issues surrounding Ferneyhough’s piano music, with a page and a half of endnotes documenting the already extensive scholarship on the subject.

Even so, Lemma-Icon-Epigram is a good place to start. The piece has become a talisman for virtuosic pianists specializing in new music, so much so that those in the know are on first-name terms—so it’s Lemma to you and me. Ferneyhough has a life-long interest in Italian renaissance culture, and the movement titles refer back to a poetic form from the 16th-century. Again, the music’s notation precedes it, and there are certainly many passages here of fearsome complexity. But that is clearly not the only reason for the work’s revered status. Ferneyhough has a unique relationship with the piano. His music, in all genres, employs extremes of dynamic, range, and articulation, all of which can be explored on the piano. A characteristic sound that we often hear is an extremely loud but short note or chord, a dull thud, more a gesture than a pitch, which emphasizes the sheer physicality of the piano itself. But does Ferneyhough employ this sort of effect because of an interest in that physicality, or is it merely one pole in his expanded dynamic and articulation spectra? Listening through the chronology of works here, it is difficult to draw a clear distinction, and as his music grows more complex and subtle, it also seems to become ever-more suited to the piano and its mechanism.

Hearing the music is chronological order allows us to assess the early works on their own terms. Pace concedes in his liner note that Ferneyhough’s piano works are a poor guide to the composer’s development, as there are three large gaps, each of around 15 years, in which his works for other forces extended his style in important ways. As a result, the early four works here seem orphaned, all written 1965–1967 and therefore separated from the iconic Lemma by 15 years. But we hear the mature Ferneyhough in embryo in these pieces: Invention (1965), Epigrams (1966), Sonata for Two Pianos (1966), and Three Pieces (1966–67). The music often sounds pointillistic, but the composer experiments with different formal approaches. In Epigrams, he makes a virtue of the aphoristic quality of his post-serial language. In the Sonata for Two Pianos (performed here with Ben Smith), he bases the 16-minute single-movement form on expanding and contracting cells, and so many of the utterances are deliberately prolonged. The Two-Piano Sonata is notable for the clarity of its textures: we might imagine the (mature) Ferneyhough using two pianos to create music twice as dense, but throughout the work he explores more subtle combinations and balances.

The second disc is devoted to works from the 21st century. The most impressive of these, and the high point of the entire album, is Opus Contra Naturam, a substantial excerpt from Ferneyhough’s music theater piece Shadowtime, about the death of Walter Benjamin. Pace describes the central section of this work as “probably the most demanding of all Ferneyhough’s piano writing,” a startling conclusion, given the reputation of Lemma. And the music here certainly is more involved, with greater contrasts and layering, and plenty of that emphatic, rhythmically incisive writing that makes Ferneyhough’s mature music so satisfying. There are words spoken over the music, which appear to be performed by Pace himself—no wonder he finds the work “demanding.” His voice is very much in the background, and although the texts are in English (not printed in the liner) it is very difficult to make them out. That is frustrating, but it is also in the spirit of Shadowtime, which is primarily a chamber orchestra work, with the voices part of the musical texture and the narrative a subsidiary layer within the conceptual whole. Quirl (2011–2013) is music in a similar spirit—self-similar, in fact, as it is based on fractal rhythms. Some explanation of that would have been appreciated, although the music itself exudes a sense of mathematically derived complexity. The final piece El Rey de Calabria (c. 2019) is dedicated to the composer’s cat and is an uncharacteristic withdrawal from the confrontational character of the earlier music. Pace compares it to Schoenberg’s op. 33, a fitting allusion.

The recordings were made at City University and the University of Southampton, and the audio is clear. Pace performs with grace and conviction, and, most importantly in this repertoire, without any obvious sense of virtuosic display. The music is clearly under his fingers, and the excitement and tension, extreme as they often are, result from compositional choices rather than a virtuosic high-wire act. The most obvious competition is an album from Nicolas Hodges released in 2015, entitled Brian Ferneyhough: Complete Piano Works (Neos 11501). Repertoire-wise, Hodges gives the same works, but without Invention, which has only been rediscovered since that recoding, and El Rey de Calabria, which also postdates it. (Pace shows admirable scholarly caution is subtitling his “Complete Piano Works” with the date span “1965–2018”). Hodges collaborates with a separate speaker in Opus Contra Naturam, who is more clearly audible, and the result is more conventional melodrama. Both pianists are masters of this music, but Hodges has a lighter touch and gives a sense of exploring the textures. The result is more impulsive and more immediate. He has the better audio as well, which really benefits the quieter music. Pace is more grounded. He has a more tactile relationship with the keyboard and although the music is less playful under his fingers, the more consolidated sense of meaning and significance he projects is to the music’s advantage. Tempos tell a different story, and Pace is generally faster than Hodges, especially in Quirl, which Hodges plays in 15:57 to Pace’s 11:28. More interesting is the respective performers’ relationship with Ferneyhough’s deliberately complex notation. In his liner, Pace points out that notions like “accuracy” or “perfection” are more open to deconstruction here than in most music. Instead, the performer must cultivate a relationship with the notation, from which the interpretation grows. Significantly, the differences between Hodges and Pace in this music are more of tone than technique, with little to separate them in terms of rhythm and articulation. That suggests a validation for Ferneyhough’s contentious notation practices, which, of course is only one aspect of this music, and Pace, to his credit, always provides a satisfying aural experience. We quickly forget how this music looks and can focus instead on what it sounds like and what it means.