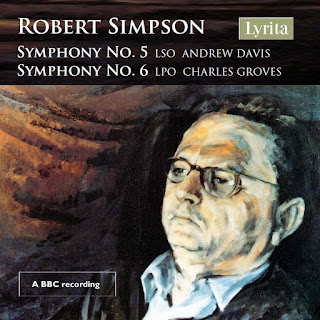 The centenary of the birth of composer Robert Simpson (1921–1997) is a minor milestone in the history of British symphonism and is the motivation behind this release, of live recordings from the premieres of his Fifth (1972) and Sixth (1977) Symphonies. The Fifth, in particular, finds Simpson at the height of his powers, and the performance here is electric. A fitting tribute then, and also a release of some historical significance.

Simpson was a writer and broadcaster, as well as a composer, and his research interests focused around Haydn, Bruckner, Sibelius, and Nielsen. Those four symphonists are useful points of reference in triangulating Simpson’s style, and his approach to symphonic form can usually be linked back to them in some combination. The Fifth Symphony is in a symmetrical five-movement structure. It opens with a big—Haydnesque—surprise. The very quiet introduction suddenly erupts into a blaze of orchestral color, and from then on the first movement is vibrant, rhythmically incisive, and contrapuntally complex, like Nielsen but with denser harmonies. That first jolt clearly had the intended effect on the audience at the first performance. The Daily Telegraph review, by Martin Cooper, quoted in the liner said, “It seemed as though everyone in the audience had been literally jerked forward – as in a reflex spasm – by the sudden and sustained impact of the first tutti fortissimo outburst.” Credit for that piece of theater should go to conductor Andrew Davis, who would then have been around 28. He draws a dynamic and powerful performance from the London Symphony Orchestra, who had commissioned the work, and who do it full justice. Simpson suffered a serious illness while writing the work, a brain hemorrhage, and the last two movements were composed as he recovered. Even so, there is remarkable consistency across the work, and the ending, where chaotic tutti textures evaporate to leave a quiet, sustained high C, elegantly mirrors the opening gestures of the symphony. One of the other newspaper reviews quoted in the liner, from Desmond Shawe-Taylor in the Sunday Times, says the symphony would “compel all but the most rigidly advanced of listeners to take a closer look at this remarkable composer.” In hindsight, it is difficult to understand even what “rigidly advanced listeners” might have against this music, but this was the era when William Glock was BBC controller of music and Boulez led the BBC Symphony. Today, Simpson’s music sounds very much of its time, drawing on symphonic traditions, but not deliberately archaic, and a significant stylistic advance on the English pastoralists of the previous decades.

The Sixth Symphony was written at the suggestion of gynecologist Ian Craft, who saw a connection between fetal development and thematic development in music. The result is a large-scale two-movement work that gradually develops from vestigial motifs into much broader structures. Simpson himself conceded that “Such an idea is so close to the essence of one kind of symphonic music that there should be no need for programmatic description.” Indeed not, although he goes on to explain that an episode of repeated spasms mid-way through the work represents “a kind of birth.” But this sort of large-scale motivic development was central to Simpson’s approach to the symphonic form, which found its most complete and distinctive expression in the Ninth Symphony (1987). The Sixth looks forward and back across Simpson’s symphonic output (11 symphonies, dated 1951–1990), and is impressively constructed and orchestrated, but it does not stand out the way the Fifth does as a unique and unified symphonic conception. The performance here may be one issue, and liner note writer Jürgen Schaarwächter is possibly too candid in including a complaint from the composer that the orchestra was under-rehearsed and “Just hanging on for grim death….” Simpson perceived the performance as such a failure that he soon returned to the score and made significant revisions. But all London orchestras, including the London Philharmonic here, are renowned for their sight-reading, and the performance, under Charles Groves, sounds committed and accomplished, even if the textures are sometimes rough around the edges.

Although the documentation makes no mention, these recordings are clearly from the archive of Richard Itter, who spent decades capturing Third Programme/Radio 3 broadcasts on the highest quality tape recording technology of the day. The result is more than serviceable stereo sound: It is in the “archival” category, and sometimes lacks presence and weight in the climaxes, but the clarity belies the recordings’ age. The sound for the Fifth is slightly better than that for the Sixth, but even listeners adverse to vintage audio should have few concerns.

In the 1990s, studio recordings of all 11 Robert Simpson symphonies were made for Hyperion, all but the 11th under Vernon Handley with the Bournemouth Symphony and Royal Philharmonic (the 11th was recorded after Handley’s death by Matthew Taylor with the City of London Sinfonia). The discs were released individually, and then as a box set (44191/7). All are out of print now, although they are available as downloads. Comparison of Davis and Handley (with the RPO) in the Fifth finds Davis at a clear advantage. He is much better at delivering the shock factor, and he has the obvious benefit of an unprepared audience. Davis’s tempos are faster throughout, which brings powerful dynamism, especially to the outer movements. For the Sixth Symphony, Handley (again with the RPO) is preferable to Groves. The studio recording is again significantly slower, but this time the result is a more natural feeling of symphonic development and unforced breadth. His better rehearsed orchestra is another advantage, as is the studio sound. But Simpson had revised the work between the two recordings, so there is a clear advantage in hearing both. But it is the Fifth Symphony recording that recommends this new release: the performance was clearly a major event, and enough of that frisson is captured here for us to understand what the excitement was all about.