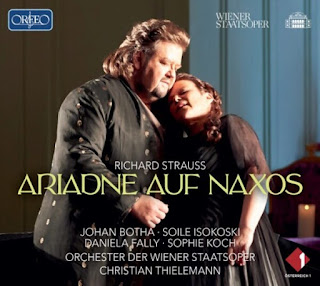 
Cast list, company, and conductor auger well for this new release of Ariadne auf Naxos. The format is familiar from a recent Frau ohne Schatten from the same label (C991203), Strauss under Thielemann from Vienna State Opera, in a recording from Austrian radio, now appearing in an elegant CD issue. This Ariadne has the additional draw of Johan Botha as Bacchus—the tenor still highly marketable five years after his death.

The cast here is certainly impressive, but, as with the previous Frau ohne Schatten, potential buyers should be aware of the limitations of the radio broadcast. The audio is fine, but the singers are often distant from the microphones. That said, there is little stage noise, mercifully given the slapstick intrusions later in the opera. The production itself was directed by Sven-Eric Bechtolf and first staged in 2012. It is quite traditional by all accounts, and didn’t upset Vienna audiences. The 2014 revival, from which this recording was taken, seems to have been more of an event: most of the supporting cast are the same, but Botha and Thielemann are both new, as is Soile Isokoski in the title role. Such is Thielemann’s authority in Strauss these days that it was considered notable that this was his first performance of Ariadne in Vienna—despite his being a known quantity in all of Strauss’s major operas in Dresden.

Thielemann does not disappoint. His way with the score is flowing and nimble, and the communication and balance he facilitates between stage and pit is admirable. He is known as a heavyweight, largely because he specializes and Wagner and Bruckner, but he also capable of operating at a chamber music level, and nothing here feels overly ponderous or weighty, not even the Prologue, which is all suitably conversational. The orchestra is similarly reserved early on, but Thielemann beautifully gauges the increasing warmth of tone as the opera proper grows in stature over the last half hour. In the absence of visuals, this last scene is the major draw for listeners, but Thielemann and co. ensure that there is plenty of interest and entertainment in the Prologue too.

Vienna State Opera can be relied on to field strong singers for any Strauss opera, and the performance here from the large cast feels like an ensemble effort. Jochen Schmeckenbecher and Norbert Ernst bring character and charm to the roles of Music Teacher and Dance Master, as does Sophie Koch as the Composer, though she sometimes sounds overwrought. As an audio-only experience, this performance succeeds dramatically thanks to the careful casting of Daniela Fally as Zerbinetta and Soile Isokoski as Ariadne. Their voices are both very beautiful but clearly distinct. Fally is pure of tone. She is also very impressive technically, and manages the high tessitura with ease. Isokoski, by contrast, is rich and warm. She has a slow but carefully controlled vibrato which brings elegance and sophistication to her every line: an exceptional performance that stands out, even from this strong cast. The recording is clearly being marketed on the basis of Johan Botha’s Bacchus, which seems perverse given the brevity of his appearance in that role. Even so, he blends well with Isokoski in the closing scene, and the richness and character of his voice demonstrate why he is still so fondly remembered. A few of his high notes are shaky, but no doubt he will be forgiven those.

As with the previous Frau ohne Schatten, this release is housed in a three-way gatefold, this time with the liner glued into the right wing. There is no libretto, and the liner is dominated by artist bios. An attractive release, worth hearing more for the contributions of Thielemann and Isokoski than for Botha, impressive as he is.