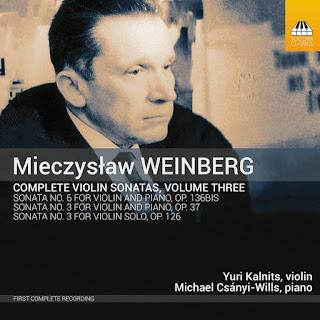 It seems like only yesterday that Mieczysław Weinberg was an obscure composer, his reputation hampered by multiple spellings of his name, and his role in musical history limited to a footnote in biographies of his close friend Dmitri Shostakovich. But now, his voluminous output is the subject of several encyclopedic recording projects, most of which remain ongoing, due to the sheer number of works involved. Most are producing impressive results, and the competition is keen: This series of violin sonatas from Yuri Kalnits on Toccata is up against Linus Roth on Challenge, Grigory Kalinovsky on Naxos, and Stefan Kirpal on CPO, as well several notable one-off recordings from Gidon Kremer. But Kalnits holds his own, and this, Complete Violin Sonatas: Volume Three, is compelling and would also serve as an ideal introduction to Weinberg’s chamber music.

The Violin Sonata No. 3, op. 37, was composed in 1947. This was a few years into Weinberg’s friendship with Shostakovich, and the comparisons are instructive. David Fanning writes in his liner note that the slow movement exhibits a “tortuous lyricism” that reflects the similarly ascetic slow movements of Shostakovich’s Second Piano Sonata and Cello Sonata. In fact, “tortuous lyricism” sums up almost everything on this album very well. Weinberg had a strong lyrical impulse, with a decidedly Jewish flavor (especially in this Third Sonata), but favored a strict economy of means. The result, in both the Third and Sixth Sontatas here, is a directness and intimacy of expression.

The Sonata No. 3 for Solo Violin, op. 126, is much later work, from 1979. The violin now stands alone, but Weinberg raises the stakes, with more dramatic and emphatic gestures than are found in either of the accompanied sonatas. A lot of the violin writing here is very high, and much is at a sustained loud dynamic. The work is in a single movement, but visits a wide range of styles and moods. The composer relies on fluent technique from the performer, especially in the double-stopping, but he does not show off the virtuosity in the way that he does in the First Solo Sonata.

The Sixth Violin Sonata, op. 136bis, dates from 1982. It was not performed in Weinberg’s lifetime, and the score was only discovered among his papers in 2007, a discovery that timed in nicely with the revival of Weinberg’s work. The “tortuous lyricism” is even more evident here, the music always following a lyrical impulse, but the textures even more skeletal, with extended solo passages for the both violin and piano. But there is also a more desperate and impassioned aspect to this music. It starts with an incessantly repeating figure from unaccompanied violin, and the gentle insistence of that opening gesture continues throughout the entire work. As with both of the other sonatas on this recording, the Sixth ends quietly, with a feeling of gentle resignation. That is a Weinberg trademark, but it is more successful in some works than others. Often, it feels like that composer has simply lost the will to continue, but in the Sixth Sonata it brings a more meaningful sense of closure, as it both balances and calms the insistent drive that has carried through the sonata’s three movements.

Yuri Kalnits and Michael Csányi-Wills favor intimacy over grand statements in this repertoire, a choice that both succeeds in communicating Weinberg’s personal voice and in separating them from the competition. The sound engineering is part of that profile, with the violin recorded up close, and the piano not subject to extraneous resonance. (The accompanied sonatas were recorded at St John’s Church, Fulham, London, and the Solo Sonata at K Studios, London; Csányi-Wills produced the former, and Kalnits the latter.) Kalnits has a woody edge to his tone, but with plenty of warmth and richness. His vibrato is narrow and finely controlled. He sometimes takes liberties with articulation, hinting a swoops and slides, though without fully indulging. That suits Weinberg’s Jewish side and is never taken to extremes. In the Solo Sonata, Kalnits sometimes sounds strained, and the combination of high tessitura, continuous double-stopping, and loud dynamics occasionally challenges both his sound production and intonation. No such qualms in the accompanied sonatas though. The most satisfying music-making here is in the slow movement of the Sixth Sonata, where Kalnits’s woody tone balances elegantly against the warm piano sonorities beneath.

After hearing Kalnits in this repertoire, most of the competition seems excessively theatrical and overwrought. The most obvious comparison in the Sixth Sonata is Gidon Kremer and Yuliana Avdeeva (DG 003111102). Kremer is less lyrical but more theatrical. His articulation is more varied, and his dynamics are more extreme. It is an impressive account, and probably deserves top billing, but Kalnits finds something different, an intimate, confessional quality that comes through in his continuously lyrical playing. In the Solo Sonata No. 3, the most obvious competition is Linus Roth (Challenge 72688). Again, Roth deals in big, emphatic gestures, while Kalnits tends to be more reflective and personal. The sheer purity of Roth’s tone, and the precision of his intonation and tone control, set him apart, but Kalnits offers a welcome alternative. Roth is also convincing in the Third accompanied sonata (Challenge 72567), and there is also a notable account from Kolja Blacher (Hänssler 93190), who was ahead of the Weinberg revival in 2007. Kalnits again takes a more lyrical approach, but he is also slightly faster in the first movement than either Roth or Blacher, and his sense of gentle but insistent propulsion holds the music together. In terms of the competition, this Third Sonata is the compelling reason to hear Kalnits and Csányi-Wills’s new release, but on their own terms, the accounts of all three sonatas are excellent.