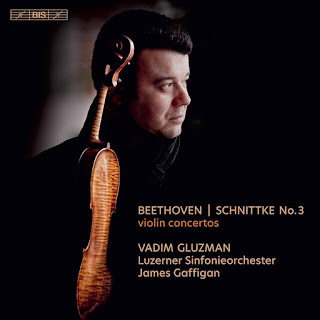 
Most of the music on this album is by Beethoven, but the program is actually a homage to Alfred Schnittke and the diverse trends in his music of the 1970s. In 1974, Schnittke’s First Symphony was premiered, the work a manifesto of his “polystylistic” approach. Initially, Schnittke’s polystylism involved violent stylistic clashes between quotations of music from different eras. But it soon settled down into more subtle interactions between styles. His cadenza for the Beethoven Violin Concerto was composed in 1975 and demonstrates this new approach, combining themes from the concerto with those of several 20th-century violin concertos, but always to highlight the similarities rather than the differences. But Schnittke’s output was moving in two different directions at the time. In 1972, his mother died, and many of his works in the following years took on a somber, memorial character in her memory. That trend is represented here by his Third Violin Concerto, written in 1978, a dark and quasi-liturgical piece in stark contrast both to Beethoven’s vibrant concerto and to Schnittke’s ingenious contributions to its cadenzas.

The first movement cadenza for the Beethoven was composed at the request of Mark Lubotsky, who began including it when he performed the concerto around the world. This proved hugely controversial, and immediately established Schnittke’s reputation as an iconoclast. The cadenza was soon taken up by Gidon Kremer, who also asked Schnittke to write cadenzas for the second and third movements. Kremer recorded the cadenzas with Neville Marriner and the Academy of St. Martin in the Fields (Philips 6514 075). But the fad soon passed, and, to my knowledge, the Kremer is the only previous commercial recording of Schnittke’s cadenzas.

Between his First Symphony and his Beethoven cadenzas, Schnittke had become acquainted with the Berio Sinfonia. Where Schnittke’s First Symphony is an anarchic mix of styles and quotes, the third movement of Berio’s work is a carefully wrought tapestry of snippets from 20th-century orchestral works, all appearing in their original keys but all fitting together seamlessly. Schnittke’s first-movement cadenza is a similar project. It includes the timpani strokes that appear in Beethoven’s own cadenza to the piano version of the concerto. From here, he exploits the fact that the Bach chorale Es ist Genug, as quoted in the Berg Violin Concerto, is very similar to the rising scale theme of the Beethoven Concerto. He then weaves in quotations from the violin concertos of Bartók and Shostakovich, before coming back round to the duality between Beethoven and Bach/Berg, with which he opened. The second-movement cadenza is a brief, one-minute transition into the finale, with the finale cadenza is a more dramatic affair. The timpani returns, and 10 orchestral violins appear at the cadenza’s climax, segueing back to the main theme with a rising glissando-trill effect.

It seems churlish to complain about performers taking liberties with cadenzas, but Vadim Gluzman does so here. When Kremer recorded the work with Marriner, he made several changes and cuts. He made a major cut in the first movement cadenza, bars 91–98, and replaced the second movement cadenza with one of his own. He also prefaced the third movement cadenza with 8 bars, again presumably of his own invention, and removed about 6 bars of Schnittke’s cadenza as written. Gluzman does likewise. His accounts of the cadenzas follow all the cuts and additions in the Kremer recording, but he makes an additional cut in the first movement, bars 53–64 (wholly omitting the quote from Bartók’s First Concerto), and comes up with his own second movement cadenza, and brief downward-scale flourish. Performance-wise, Gluzman emphasizes the continuity over the contrast in the first movement cadenza. That is a shame, because Schnittke goes to some lengths to distinguish the Beethoven theme from the Bach/Berg theme, initially presenting them in arco and pizzicato respectively, a contrast that Gluzman plays down. But the payoff is a heightened unity to the cadenza that demonstrates Schnittke’s sheer skill in constructing it from untransposed quotations (Schnittke compared the task to building a house without nails).

The rest of the Beethoven Concerto is a workaday affair. The timpani at the start sound flaccid, although that rough-around-the-edges sound gives more impact to their unexpected reappearance in the cadenzas. James Gaffigan leads a clear but underinflected account from the Lucerne players. Gluzman plays with emphatic articulation and always into the strings, a very Russian sound in other words, that suits Beethoven’s declamatory utterances. There is a valuable clarity to Gluzman’s tone, but his lower register lacks weight, at least in this music, and the result is an occasional lack of drama and heft.

Gluzman’s catalog for BIS to date has focused primarily on modern music from Eastern Europe—his recent recording of the Pēteris Vasks Violin Concerto, “Distant Light” (BIS 2352) is a highlight—and so his stylistic sympathy for the Schnittke Third Concerto comes as no surprise. The work was written to be performed with the Berg Chamber Concerto, and is written for a similar ensemble. It moves from an erratic unaccompanied opening, via austere and quasi-liturgical wind textures to a neo-Romantic conclusion. Gaffigan handles all these moods well, and the precision of the Lucerne winds, combined with the trademark high-end audio from BIS, does the music full justice. Gluzman’s focused tone is ideal here, and he creates all the atmosphere the music needs without exceeding its chamber music scale. Among the four versions of the concerto now available, this is the clear favorite. Gidon Kremer’s box set of all four Schnittke concertos with Eschenbach (Teldec 3984-26866-2) is a useful reference, but lacks enthusiasm from all involved. The other leading contender is also from BIS (517), a 1991 account with Oleh Krusa and Eri Klas. That version is more febrile and unpredictable, but the faster tempos and cleaner textures in Gluzman’s account better suit the music’s contemplative and austere elegance.