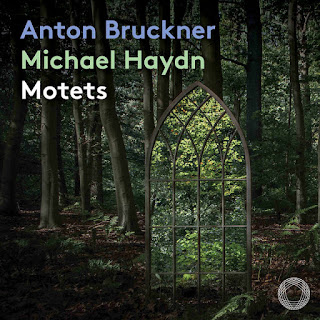 This disc pairs motets by Bruckner with those of (Johann) Michael Haydn (1737–1806), Joseph’s younger brother and longtime court composer to the Archbishop of Salzburg. The liner notes, by Markus Schwering, explain the logic of the coupling. Both composers were raised in the tradition of “Austro-Danubian Catholicism,” and both are representative of a movement in Austrian church music that consciously moved away from prevailing Italian models. More compellingly, though, we know from surviving records at the St. Florian Monastery, where Bruckner was a choirboy, that Michael Haydn’s sacred works were regularly performed during that era, and so Bruckner must have known them well.

Haydn spent most of his career as a church musician, and sacred choral music dominates his catalog. Unaccompanied motets and hymns, however, only make up a small part of this (there are 47 Masses and seven oratorios among his larger choral works) and so the six works included here give a reasonably broad survey. Comparisons with Mozart (Haydn’s predecessor in the Salzburg post) are continually suggested by his high Classical style, but Haydn is more austere, and led more by harmonic progression than melodic line. Although the harmonic language is plainer than Bruckner’s, there are clear textural connections that may imply direct influence. In particular, a cadential device in Bruckner, where the upper lines move to the offbeat for a series of mild suspensions before coming together at the end of the phrase, and this is a favorite device for Haydn too. The Haydn selections include two settings of Christus factus est, and Bruckner’s famous setting is also included, offering direct comparisons. As Schwering notes, the fairly rapid modulations and the irregular phrase patterns in Haydn’s settings look forward beyond the Classical era, and those melismatic cadences link even more directly to Bruckner.

The selection of Bruckner motets is imaginative and spans his career 1861–1892. Several of the better-known motets are included, such as Locus iste, Os justi, and the 1861 Ava Maria, but most of the others are more obscure, or at least rarely anthologized. Trombones are included, but only for two numbers, Inveni David and Afferentur regi.

The MDR Leipzig Radio Choir is a professional chamber choir, and their discography on Pentatone to date has focused on opera, plus a Missa Solemnis under Marek Janowski (5186 565). Here, they perform in the Paul-Gerhardt-Kirche, Leipzig, an 19th-century Jugendstil affair to the south of the city center. The nave is tall and narrow, and not especially large. Despite the size of the choir, about 50-strong, and the church setting, the Bruckner in particular feels underpowered. A sessions photo in the liner shows long-armed microphones all around the singers, and yet the church acoustic is all but absent, with even the rear channels in the surround mix giving little sense of atmosphere. The singing is generally proficient, although the textures are sometimes a little blurred in the middle voices. Tempos, from Philip Ahmann, who took charge of the choir in 2020, are slow and steady, as if to accommodate the church resonance that we don’t hear. All of which makes the performance and recording style better suited to the Haydn than to the Bruckner. The Haydn sounds crisp and clear, while the Bruckner often feels in need of more space and warmth, especially given the well-documented ability of surround sound to reproduce generous church acoustics.