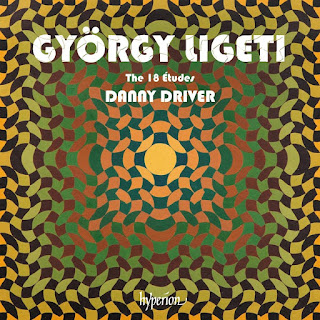 
Danny Driver’s new and definitive account of the Ligeti Études completes the music’s rapid assimilation into the core piano repertoire. The two completed books received their first commercial recordings from Volker Banfield (Wergo 60134-50, 1987) and Frederik Ullén (BIS 783, 1996), respectively. But the most important event in their recording history was the composer-endorsed version from Pierre-Laurent Aimard (Sony 62308, 1997). Aimard presented the music as tenuously controlled chaos, the textures in most of the movements febrile and unstable, always seemingly on the edge of complete breakdown. That approach relied on percussive attacks and dry textures, light on pedal but heavy on dynamics, especially in the many codas where the music spins out of control, finally disappearing off one or other end of the keyboard. The Études soon became vehicles for virtuosic display, and throughout the following two decades, a steady stream of recordings appeared by young new-music pianists, keen to show their credentials—like Ferneyhough and Sorabji as the Liszt or Godowsky for our times.

The music certainly is virtuosic, but Danny Driver shows there is much more to it than that. His informative and reader friendly liner note lists the many influences that the composer absorbed in the 1980s—jazz, music from Latin America and Africa, Renaissance polyphony—and only then goes on to mention chaos theory and fractal geometry; the lyrical and ethnic elements here taking priority over the math that inspires the music’s complexity. Driver treats the music as historically codified, canonic and therefore open to new interpretations. His interpretation emphasizes continuity and structure over foreground events, though without ever simplifying the music or imposing any more order than is necessary.

Tempos are slower than the norm, and this may be the slowest account on record. In part, that suggests Driver is distancing himself from the overt virtuosity of previous interpretations, but Ligeti gives metronome markings for many of the movements, and Driver is consistently slower than those as well. In most Études the difference is just a few seconds—though that can be significant in such short and densely textured works—but in “Automne à Varsovie,” the finale of Book 1, his 4:52 is a half minute longer than Ligeti’s suggested 4:20.

Coupled with this is an unusual warmth of texture. The recording was made in a church, St. Silas, Kentish Town, London, on a Steinway. Although the resonance is not church-like, the piano sound is always warm and resonant. And Driver’s approach to Ligeti’s fast-running accompaniments is usually one of flowing, even legato. The First Book of Études were written at a time when Ligeti was in the process of rediscovering melody, after several decades in the avant-garde. For Driver, this music is all about melody, and the tunes are always emphasized and lyrically shaped. Despite the slower tempos, Driver highlights large-scale progressions to add a valuable sense of unity and progression. In the First Étude, “Désordre,” for example, there is a long and gradual crescendo—well over a page of music—and Driver carefully grades this progression, making it the prominent aspect of this passage, rather than the complex accompanying textures that dominate all other accounts here.

The slower tempos and more reflective approach are particularly valuable in the quiet numbers. Ligeti described Étude No. 5, “Arc-en-ciel,” as a jazz number (he cited Bill Evans), and it has never sounded so much like one as here. Another revelation is “Fém,” the second étude of Book 2. All recordings that I have heard take this movement faster than Ligeti’s metronome mark. Driver does too, but he is still considerably slower than most. The title means “metal” in Hungarian, and the piece is a proto-minimalist mechanical-sounding web of interlocking open fifths. The greater space that Driver allows between each sonority gives an austere, crystalline quality that other pianists miss in the rush.

Ligeti began a third book of études, but only completed three numbers before he died. Early complete recordings omitted these, as they had not yet been written, but that seems to have given license to later pianists to omit them as well. That is not such a bit thing, as the music here is different, gentler and more reflective, and is only worth including if the pianist actually has something to say. Fortunately, these three short numbers are ideally suited to Driver’s approach. They require a much greater subtly of texture to create the necessary contrasts—hence the title of the first number, “White on white”—and Driver’s delicacy and responsiveness bring this music to life as never before. As with the first two books, these are definitive recordings, and any questions about their inclusion in the canon, Ligeti’s own or that of the piano itself, are now decisively settled in the affirmative.