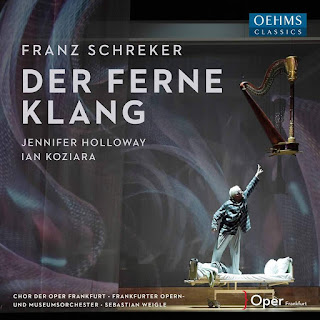 
This new recording of Schreker’s Der ferne Klang brings the opera full-circle. It was premiered at Frankfurt Opera in 1912, and this is the first recording of the work from that company. The opera has had a turbulent history in the intervening years. It was Schreker’s greatest success, and was performed regularly in Germany up until the Nazi era, when it was banned as Entartete Musik. Schreker moved to America, where he died in obscurity in 1934. Interest in the opera gradually revived from the late 80s, and two recordings were made in close succession, with the Hagen Philharmonic under Michael Halász in 1989 (Naxos 8660074-75) and with the Berlin RSO under Gerd Albrecht in 1990 (reissued as Capriccio 5178). Since then, several other contenders have joined the market. Leon Botstein led the American premiere of the work in 2007, and a recording of that concert performance was available for a time. There is also an SACD release of a staging from Augsburg under Dirk Kaftan (Ars 38080).

Ears prick up at the mention of hi-res audio, because Schreker reaches towards a sonic ideal in this opera that may be all but unattainable. He even writes that idea into his self-authored libretto. The story concerns a composer, Fritz, who imagines a “distant sound” within himself, but ends up destroying his own life, and that of his love, Greta, in pursuit of it. Schreker’s music is harmonically and texturally ambitious, employing a huge cast, chorus, and orchestra, and a harmonic language, which, while still tonal, is forward looking for its time. All previous accounts on disc have been found wanting in one way or another. The vocal demands on the cast are extreme, and the colors that Schreker seeks from the orchestra are ill-suited to a modest band situated in a theater pit.

This new account is taken from live, staged performances, of a production directed by Damiano Michieletto. The sumptuous liner booklet offers tantalizing glimpses. Michieletto sets the story within a framing narrative, at an old peoples’ home, where the (surviving) characters look back nostalgically on the events. A lot of the mise-en-scène involves the principals front of stage, while shadowy actions are projected against a blue back-drop—just out of reach, like Fritz’s distant sound. The company is in a good position to do this music justice. They have a large chorus and orchestra and a good track record with Oehms for well-produced opera recordings. The recordings are made in-house, and the Frankfurt team employ close-range microphones, incorporated into the costumes, ensuring clarity and balance between stage and pit. There is some stage noise here, but it is never distracting.

Sebastain Weigle has his champions and his critics. All agree that he is a reliable conductor in the German Romantic repertoire, although some find him pedestrian. This recording supports both views. He understands the importance of orchestral color to this score, and brings out elegant textures from the orchestra. The lower winds—bass clarinet, contrabassoon, tuba—are particularly well represented. But the upper string tone is sometimes thin, and the celesta and harp could have been brought forward more—but we’re already back to the sonic ideals that even the composer himself acknowledges are unattainable. Weigle shapes the phrases carefully and clearly. Too much so perhaps: Gerd Albrecht is more flowing and free in his account. But the audio here is preferable to the Albrecht, arguably a more significant virtue in this music.

Greta, rather than Fritz, is the main character in the story, and has the most to sing. (Another important plot strand concerns her father losing her in a game of skittles and her protracted descent into prostitution.) It is therefore the most important role to cast, and American soprano Jennifer Holloway is up to the task. Her voice is bright and powerful with a well-controlled vibrato. As Fritz, tenor Ian Koziara doesn’t match her in vocal power, but he too has an attractive voice. Schreker often uses a device in which Greta and Fritz sing together, quiet and high in octaves in a tremulous tone, and the two singers seem to have been chosen specifically to bring off this effect. Elsewhere, Koziara’s lack of heft can be a liability, but careful post-production balancing keeps him to the fore. The rest of the large cast in generally strong. The only weak link is Barbara Zechmeister as Greta’s mother, which is unfortunate, as it is a major role.

Oehms, as ever, provide elegant packaging. The documentation includes a detailed essay about Schreker’s harmonic language, although some of the technical terms are garbled in translation. A libretto is included. Its only in German, but this is still progress, as this seems to be the first ever release to include one. Three CDs seems indulgent, when the other accounts are all on two, although that does mean no break in the second act. And while the discs themselves are very elegant, no clear indication is given as to which is which—to find the next act you have squint to read the catalog number.

This review appears in Fanfare issue 45:1.