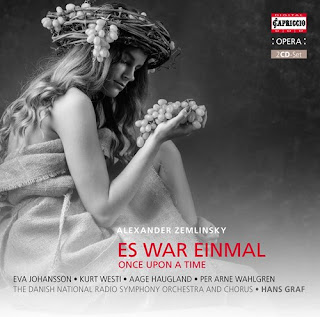 
Capriccio first released this 1987 studio recording of Zemlinsky’s fairytale opera Es war einmal (Once Upon a Time) in 1990, and are now reissuing it to mark the 150th anniversary of the composer’s birth. The opera was written early in Zemlinsky’s career, 1897–1900, and taken up by Gustav Mahler, who conducted the premiere in Vienna and also assisted in revising the score, including adding 50 bars of his own music at the end of act II. As a fairytale opera, the work closely resembles Humperdinck’s Hänsel und Gretel; both composers are writing for young audiences, which in Zemlinsky’s case means clear harmonies and emphatic dramatic devices in the music. The influence of Mahler is everywhere apparent, in the flowing orchestral textures and the military fanfares and the rustic dances. But unlike Humperdinck, Zemlinsky maintains a conservative harmonic palette—there is little Wagner here. The composer’s later operas often rely heavily on speech, as Sprechgesang or melodrama, but there is none of that here, and the prominence of the orchestral writing, including a substantial prelude, makes the audio-only experience all the more satisfying.

This recording is the only complete traversal of the score since a Mannheim production in 1912. Danish Radio does the work proud. The early digital sound is bright and clear, although the singers are more forward of the orchestra than is comfortable. The all-Scandinavian cast is led by Eva Johansson, a bright lyric soprano in the role of the Princess. Her fall from grace, and eventual redemption, are engineered by the Prince, Kurt Westi, whose rich but nimble matinee-idol tenor is ideal. His accomplice is Kaspar, sung with Baron Ochs-like pomp by Per Arne Wahlgren, who seems to be a fairytale opera specialist in his native Sweden, taking on similar roles in Hänsel und Gretel and La Cenerentola.

The first release was a lavish affair, including a 104-page booklet with all the trimmings plus a complete German-English libretto. Disappointingly, then, this reissue is bare-bones, with an irrelevant library image on the front, and a booklet of just 15 pages. So there is no libretto, but the detailed synopsis, presumably from the first release, is well translated and very readable. The minimal packaging is frustrating, although it aligns with the budget price, and even without the original trimmings, this is still a good way to experience an attractive and unduly neglected opera.