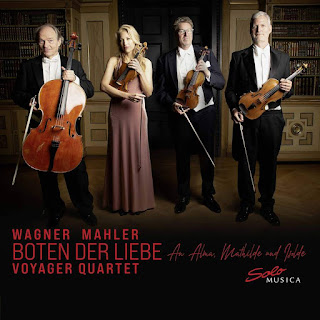 There wasn’t much Wagner going on at Bayreuth in 2020, so the Voyager Quartet took the opportunity to celebrate the anniversary of the festival’s other favored composer, giving a complete Beethoven string quartet cycle at Wahnfried for a “small but enthusiastic audience.” The quartet then returned in December to record this album, entitled Boten der Liebe (Messages of Love), an innovative reimaging of music by Wagner and Mahler. Works are chosen that link the two composers to women, Wagner to Mathilde Wesendonck and Mahler to Alma, and these are “transcribed and recomposed” by the quartet’s viola player, Andreas Höricht.

For all its innovation, the dramatic ambitions of this project are modest, as is demonstrated by the cool reading of the Tristan Prelude that opens the program. Reducing the textures to four voices has the effect of simplifying and clarifying Wagner’s harmonies and textures. The ensemble performs with care and precision, and the acoustic of the main hall at Wahnfried, while generous, does not compromise that effect. Microphones are placed close, creating intimacy, although also catching a lot of breathing and extraneous noise. Then follows an arrangement of the Wesendonck Lieder. This time, the quartet expands the scale of the voice and piano original, and the settings sit mid-way between the Lieder and the orchestral textures that Wagner later fashioned from the music in Tristan and Isolde. The effect resembles Uri Caine’s lounge version of the Liebestod on his album Wagner e Venezia, although, for the time being at least, Höricht sticks closer to the original music.

But when he gets on to Mahler, Höricht takes greater liberties. The following work is credited to Mahler, but is titled Streichquartett Nr. 1.0, A-Moll. It begins with an arrangement of Mahler’s 1876 piano quartet movement, an effective reworking, even if the rolling piano textures sound labored when transferred to the lower strings. The second movement is marked Adagietto, so no prizes for guessing where that is taken from. But Höricht includes a deft transition into it from the piano quartet movement, an effective device. Like the Tristan Prelude, the Adagietto is performed with great reserve. It is not fast (11:46), but there is very little vibrato, and the climaxes are always controlled. Movement 3 is the Adagio opening of the 10th Symphony. Or that is where it starts, at least. Höricht takes the extended harmonies of the movement’s pained climaxes as license to move into a more modern sound world, and the fourth movement, Allegro, appears to be entirely of his own devising. It is an effective conclusion, although crediting it to Mahler seems dishonest.

Another interesting pandemic project, then, and a demonstration that Bayreuth did not completely write off 2020. But the reserved performances sit uneasily with the theme of Messages of Love, even if the intimacy of the Wahnfried setting gives everything here a personal touch.