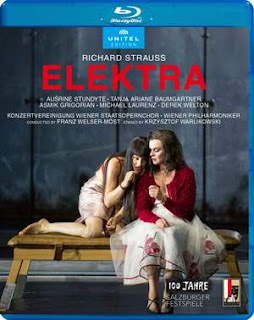 
When live performances tentatively resumed in the summer of 2020, most were small-scale affairs in front of modest audiences, or even just cameras for webstreams. But the Salzburg Festival aimed higher. That year was the 100th time the festival had taken place, an added impetus to stage an event as large-scale and “normal” as possible. The festival opened with this new staging of Elektra, a work that would be impossible to downsize, given the scale of the orchestra and the importance of the chorus. Fortunately, the producers had the cavernous Felsenreitschule at their disposal, allowing for as much social distancing as was required. In the event, that amounted to having the chorus positioned in an alcove stage left, although the Vienna Philharmonic didn’t seem particularly spread out in the pit. And stage director Krzysztof Warlikowski successfully harnessed Strauss and Hoffmansthal’s gritty psychological drama to ensure the staging had all the intensity and focus it needed, even with the singers widely spread across the stage.

Warlikowski is very much of the Regietheater school, and there is plenty of that on display here, although mostly in the first half hour. Instead of beginning with Strauss’s brutal opening chords, Warlikowski adds a prelude. Against a background of cicadas, Klytemnestra (Tanja Ariane Baumgartner) comes to the front of the stage and gives a spoken monologue into a microphone. Presumably this is taken from the Sophocles, a fraught and irate justification of her murder of Agamemnon. When the opera proper begins, Agamemnon appears, all blood and gore, and silently observes the action. The setting is modern but ambiguous, and the costumes have a 30s feel. The stage is dominated by a long rectangular pool, through which various characters troop over the course of the story, a fairly blunt metaphor for psychological turmoil. There is also a large, room-like box that moves around the stage, its walls translucent so that the action inside can be illuminated or obscured through the lighting. All the murders take place in there, plus various other nightmare scenes, most memorably an autopsy. The box idea is effective in creating distance between the actual events and the more psychological realm of the sung discourse. However, Warlikowski has used it before, in his Lulu at La Monnaie, so the idea is starting to feel stale. One Regie cliché that grates is that everybody is smoking for the first half hour or so of the opera. Why? Who cares? There is also a naked woman paraded around the stage for the first 10 minutes, just for good measure.

When the story gets going, most of the action is discourse between two characters, and so these distractions become less relevant. And Warlikowski’s Personenregie turns out to me more effective than his mise en scene. The production is well cast, but is dominated throughout by the mesmerizing performance from Aušrinė Stundytė in the title role. Stundytė has worked with Warlikowski at least once before, Lady Macbeth in Paris, and he clearly knows how to make the most of her talents. Stundytė’s voice has an ideal combination of bite and resonance, it feels like she is speaking the words, and yet her sheer musicality is never in question. And she has a fantastically disturbing stage presence: erratic, flighty, unpredictable. Perhaps Warlikowski was aware that Stundytė could completely steal the show, and added the monologue for Klytemnestra to give her more presence in the narrative. But Tanja Ariane Baumgartner is another impressive voice here, and an uncompromising presence on the stage. Asmik Grigorian sings Chrysothemis with great power too. She sometimes swoops up to the highest notes, but when she reaches them, they are always secure. Derek Welton has the voice for Orest, but he seems to be a victim of Warlikowski’s conception. He wears a big wooly jumper that makes his bald head look small, and the idea seems to be that he is a victim of Elektra’s schemes as much as he is a perpetrator. Welton portrays the character well, even if the director limits his significance.

Franz Welser-Möst takes a while to get into his stride. He is always able to whip up the climaxes, but the quieter music needs intensity too. He manages that later on, but there are some dull moments in the first half hour. The Vienna Philharmonic are predictably excellent, and the rich string tone is particularly satisfying. The audio on the recording is very resonant, no doubt a result of the sheer scale of the Felsenreitschule, and of the limited audience not absorbing the sound as a full house would. The sound takes some getting used to, but the clarity, of both orchestra and singers, is never compromised. The video director, Myriam Hoyer, has to contend with a huge and widely distributed stage, and as a result we hardly ever see it in its entirety. But the close-ups are not too close, and there is little obtrusive camera movement. Subtitles are in German, English, French, Korean and Japanese.

Musically and dramatically, this is a convincing reading of Strauss’s psychodrama, and Warlikowski manages to give it a sense of claustrophobic intensity, despite the size of the venue. But the ending is the most convincing part, and it is only after watching the whole thing that the pieces fall into place. So, not a production for Regie-phobic audiences, and even those with a tolerance for it should be warned that every visual device and cliché of the Regie canon is indulged in the first half hour.