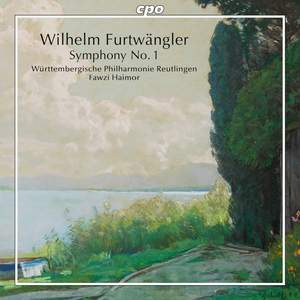 The success of Furtwängler as a recording artist has been a mixed blessing for his own music on records. He considered himself first a composer and only second a conductor, but the flourishing of his latter career meant that the majority of his compositional activity was early on. The later music is a mix of chamber and orchestral works, a piano quintet, two violin sonatas, a piano concerto (Symphonic Concerto), and three numbered symphonies (an unnumbered symphony dates from 1902). Of these, the Second Symphony is by far the most well-known, a magnum opus although far from a masterpiece. It demonstrates the qualities and flaws of Furtwängler’s mature style. The major flaw is a tendency towards large-scale, expansive structures, which, although in traditional forms, are not supported by the scale or invention of his melodic writing. But if you can overlook this, Furtwängler’s Second has much to offer. He has a conductor’s ear for orchestral color, and although the influences of his favorites are clear—most significantly Bruckner and Mahler—he has a distinctive voice and all identifiable influences are clearly well-absorbed.

The Second is well represented on disc, but its catalog demonstrates another major problem: you really need the composer himself on the podium. The go-to recording is Furtwängler’s studio account with the Berlin Philharmonic from 1951, but his four live accounts, all with different orchestras, are similarly authoritative. Since then, the work has been taken up by several conductors, most of whom had a personal relationship with Furtwängler himself and aspired to his podium presence: Jochum, Barenboim, Asahina. But none are able to bring the combination of gravitas and tempo flexibility that Furtwängler achieves, and that proves vital here. The First Symphony, then, is at a major disadvantage, as Furtwängler never performed or recorded it himself. He was apparently unhappy with the work, withdrawing it 1943, and then tinkering with the score for the rest of his life. But prior to this current recording, two earlier versions have been released, George Alexander Albrecht conducting the Staatskapelle Weimar (Arte Nova 76828 2), and Alfred Walter conducting the State Slovak Philharmonic Orchestra (Opus Arte 8.223295), the latter one of a series of releases from Opus Arte in the early 90s that covered most of Furtwängler’s significant orchestral and chamber music.

The First Symphony was composed between 1938 and 1941. The impetus was a slow movement that Furtwängler had written in 1908, that became the basis for the First Symphony’s Adagio. My earlier contention that Furtwängler had a distinctive voice is supported by the similarly in style and tone between the First Symphony and the Second. In both cases, we hear elements of Bruckner and Mahler, but if you know the Second Symphony, the composer of the First will be immediately apparent. Just for the record, in the First Symphony, the opening of the Adagio borrows from the opening of the Adagio of Bruckner’s Eighth, and the ending of the work resembles that of Mahler’s Third. But connections with Furtwängler’s Second include an insistent and emphatic quality to the voice-leading, prominent bassoon in the quiet passages, and an extraordinary Bacchanalian spirt to many of the tuttis. The two works are similar in scale and duration, and so the First cannot escape similar criticisms about lack of structural focus and imbalance between aphoristic motifs and their extended, if always rigorous, development. But the second movement Scherzo deserves mention as an honorable exception. This is a rare moment of lightness from Furtwängler, and the light woodwind filigrees that characterize the movement are continually engaging and inventive—a real highpoint of the work.

I had previously written off Furtwängler’s First Symphony on the basis of the Alfred Walter recording, and if you are in the same boat, I’d encourage you to give it a second chance with this new one. In comparison, Walter seems to be trying to compensate for the music’s excessive breadth by taking fast tempos and keeping the tuttis under tight control. Where Fawzi Haimor takes 88:14, the Walter is only 77 minutes. (The Albrecht, which I have not heard, times out at 83:12, suggesting that the Walter is the real outlier.) But Fawzi Haimor gives the sort of account that you could imagine from Furtwängler, broad and flowing, with a real focus on the long lines, and always with a keen ear for orchestral color. The first movement makes extensive use of a short motif, which in Walter’s hands become a hectoring and nauseatingly repetitive device. That might be Furtwängler’s bad, but in this new account, every return of the idea is different in tone and texture, wholly avoiding any sense of repetition. The Württembergische Philharmonie also plays much better than the Slovak orchestra and has clearly been prepared well for the score’s many challenges. A lack of depth and richness to the string tone confirms that this is a regional German orchestra rather than one of the big names, and there is also some shaky woodwind ensemble in the finale, but these are minor concerns. CPO provides demonstration quality audio for the project, giving the orchestra valuable presence and particularly benefiting the bass drum, prominent in the first movement.

Fawzi Haimor is an American conductor, and may be familiar to audiences there as a former assistant conductor to the Pittsburgh Symphony. He has since pursued a career in Europe and was music director of the Württembergische Philharmonie Reutlingen when this recording was made in 2019, although his contract there has since expired. On the basis of this recording, he is a major talent, and one to watch. This piece is very much a conductor’s symphony, and comparison with the Walter recording shows that it stands or falls on the strength of the conductor’s interpretation. As with Barenboim and Asahina with the Second Symphony, there is a strong feeling here that Haimor aspires to fill the shoes of Furtwängler-as-conductor. To his credit, this compelling account justifies that ambition.