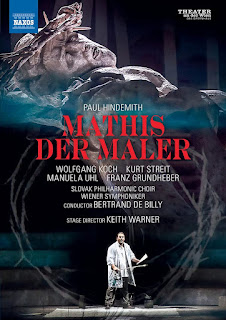 
Hindemith’s Mathis der Maler Symphony is one of his most accomplished and well-known works. The symphony was composed as a precursor and companion to an opera on the same subject, but the success of the earlier work has had the effect of almost completely obscuring the latter. Fortunately, they share much music, the best music of the opera, so listeners coming to fresh to the stage work should be primed to its musical language. The work is set in Germany (Mainz specifically) in the early 16th century, and addresses issues of religion, censorship, and power, against the backdrop of both the Reformation and the German Peasant’s War, 1524–1525. As those familiar with the symphony will know, this scenario induces music from Hindemith that combines high drama with extended liturgical allusions, not consciously archaic in style, but curiously transcendental. The narrative of the opera, complex as it is, makes clear the nature of this dichotomy: Hindemith is addressing highly dramatic historical events, while also interpreting their significance in spiritual and metaphysical terms. That abstraction increases as the opera goes on, increasing the challenges for the stage director from one scene to the next.

Briefly then: Matthias Grünewald (Wolfgang Koch) is a painter of altarpieces, under the patronage of the powerful Cardinal of Mainz, Albrecht (Kurt Streit). Grünewald is sympathetic to the Peasant’s Revolt, led by Schwalb (Raymond Very), and is also in love with Schwalb’s daughter, Regina (Katerina Tretyakova). A letter arrives from Martin Luther (no less) suggesting that the Protestant cause could be furthered by the Cardinal marrying, and plans are made. Grünewald’s loyalties are now divided, and he spends several scenes attempting to pacify the revolting peasants and protect the aristocrats they are targeting, including the Countess Helfenstein (Magdalena Anna Hofmann), whose husband is executed in the fourth scene. (In this production, the Countess is raped in this scene, a gratuitous addition.)  Eventually, Grünewald and Regina retreat into the forest, where Grünewald experiences a series of mystical visions, which place the preceding events in a broader spiritual frame, transcending the various conflicts.

This production from the Theater an der Wien is directed by Keith Warner, who brings welcome visual subtlety to a story that could easily degenerate into graphic violence and crude allegory. The set (designer Johan Engels) is on a rotating stage, at its center a huge replica of a carved figure of Christ on the cross. As it revolves, it reveals three scenes, beneath the figure’s left and right arms, and one above his head. This last is particularly effective: it is used initially for the Cardinal’s reception in scene 2, where the outstretched arms above the action are particularly evocative of a liturgical setting. The opera was completed in 1935, and connections between Grünewald’s struggles and those of Hindemith under the Nazi regime are hard to ignore. There is also a long discourse on book burning in the second scene, something that triggers associations with the Nazis these days, just by default. Impressively then, Warner studiously avoids references to the Nazis or to any 20th-century history. Costumes are in that sort of drab 19th-century style that stage designers use when they are trying to avoid specific historical allusions. Instead, the transition through the story from the corporeal events of the early scenes to the transcendental discourses of the conclusion are represented through a process of increasing abstraction. Relics of saints are another subject of the narrative, and in one of the later scenes, the stage is filled with pristine glass coffins, each containing an elegantly decrepit corpse, an arresting visual device. But Warner is too reticent with the vision scenes at the conclusion. The narrative becomes alarmingly complex here, with the visions involving the appearance of one character from earlier in the story, but who is then misidentified by Grünewald as another character. The staging offers few clues to the significance of these mixed associations. It also misses an opportunity for lavish spectacle—we hear choirs of angels, for example, but then the chorus appears, still in their drab civvies.

Visually, then, the earlier part of the production is the most satisfying. The titular protagonist is Grünewald, of course, and Wolfgang Koch gives a serviceable account. His voice lacks flair, but he embodies the drama, both musically and in stage presence. Perhaps a low-charisma singer was deliberately cast, because the real interest in these early scenes is the Cardinal, sung by the impressive Kurt Streit. Hindemith compromises the gravitas of the Cardinal’s position by writing for a high tenor (if he were writing today, it would probably be a countertenor), and Streit perfectly embodies the hollow pomp of the character, initially appearing in gaudy red leathers, in high contrast to the monochrome setting.

Though an accomplished work, both dramatically and musically, Mathis der Maler is not staged often. That may be because of the demands it makes on the cast. Three strong tenors are required, the Cardinal, Schwalb, and Sylvester, the army officer, here Oliver Ringelhahn. The three female leads are also demanding, Regina, the Countess, and Ursula (Manuela Uhl), the Protestant aristocrat suggested as the Cardinal’s bride. This production clearly benefits from the vocal resources available to the Theater an der Wien. All of the roles are given a serviceable reading, and if none of the voices stands out, for purity or power, that only increases the sense of ensemble. Some may hear Wolfgang Koch as a weak link, but the production copes by finding dramatic and musical interest in the other characters.

Conductor Bertrand de Billy gives a flowing and discursive account of the score. He prioritizes narrative flow over dramatic intensity, and Hindemith’s often dissonant climaxes sometimes feel underplayed. But he communicates well with the singers, and skillfully co-ordinates the many contrapuntal ensembles. The Vienna Symphony Orchestra are generally in fine form, though the tone of the string section is no match for that of their more famous neighbors. Special mention should go to the percussion and lower brass sections, who dominate this score and give excellent performances here.

The clear picture from the Blu-ray technology shows that the singers are wearing head mikes, and the balance between stage and pit is excellent. Frustratingly, though, there is no surround sound offered, just stereo, a serious omission for a Blu-ray release. The filming, by Peter and Paul Landsmann, is good for the first four scenes, unobtrusive, but with discreet close-ups that follow the music and action well. But then after the interval, everything changes. Suddenly we have camera angles from all over the place: the camera on the floor of the stage, in a box adjacent to the top of the proscenium. A curious change, and wholly unnecessary. Subtitles are in German, English, French, Japanese, and Korean. There are no extras.

The rarity of productions of this opera is reflected by its recording history. The most famous account is from Kubelík, and, given that the ubiquitous criticism is that Fischer-Dieskau could not handle the title role, we should perhaps be more sympathetic to Koch on the present account. Elsewhere, an early version from Gerd Albrecht and a more recent one from Simone Young with Hamburg Opera have both received positive notices. Incredibly, though, this seems to be the first ever video release of the opera. If so, it is a much-belated debut. That makes it a welcome release, one that captures the spirit of this complex but compelling work, even if Warner’s production, and Billy’s conducting, both shortchange its dramatic and mystical dimensions.