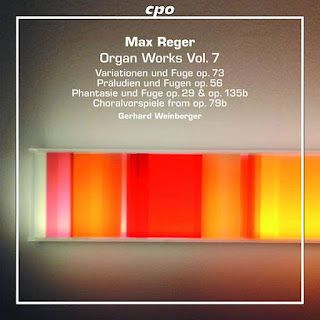 Gerhard Weinberger is approaching the conclusion of his Reger organ music cycle with this, his seventh volume. It is difficult to be sure, because collections of shorter works are divided up between the volumes. Even so, the arithmetic suggests that one final volume will follow, another two-SACD set like this and the six before it. Weinberger plays historical organs dating from Reger’s era. On this set, the first disc, primarily op. 73, is performed on the Steinmeyer organ at the Christuskirke Mannheim, and the second (opp. 29, 135b) on the Jahn organ at the Versöhnungskirche Dresden. Weinberger’s general approach throughout this cycle has been to emphasize details and strive for clarity of tone. Tempos are often slower than the norm, and he shies away from the histrionic outbursts that tend to give this music a bad name. All those characteristics are continued into Volume 7, and the results are approachable, attractive, and always engaging.

Variationen und Fuge über ein Originalthema, op. 73, is the longest work here at almost 40 minutes, but it is not one of Reger’s behemoths. It was written for Karl Straube, who specifically requested a concert work that was not based on Lutheran chorales, so as not to risk the ire of conservative audiences in Catholic regions. Reger created a surprisingly lyrical and restrained work—or at least that is how it sounds under Weinberger’s fingers. The liner reproduces the first page of the manuscript, which clearly shows the dynamics increasing from p to ff by the start of the second line. Weinberger traces the hairpins with great care on his swell pedal, but he doesn’t shake the rafters with that ff. In fact, the whole work takes on a dreamy, reflective character here. Occasionally, the melodic line wanders down to the bottom of the pedal board, and Weinberger selects an airy diapason, right at the border of perception, a beautifully atmospheric effect.

The Mannheim organ is ideal for Weinberger’s approach. The sound is clean and focused, but with plenty of character and substance. The recording sounds close, with little to no resonance and excellent balance between the ranks. The Dresden organ is smaller, but has a grander sound and is recorded with more resonance and space. The first work on the Dresden disc is the Phantasie und Fuge in C Minor, op. 29, an early work (1898) inexplicably dedicated to Richard Strauss. Reger is already experimenting here with chromatic lines and unpredictable harmonic shifts, but the structure and rhetoric are clearly modelled on Bach. The second disc concludes with the Phantasie und Fuge in D Minor, op. 135b (also dedicated to Strauss). Weinberger opts for the earlier version of this score, rather than the version that Reger revised for publication. The earlier version is about five minutes longer, and apparently contains fewer tempo-change indications—the 21:37 here compares with 15:46 for Hans-Jürgen Kaiser’s recording of the revised score on Naxos 8.554207. Kaiser gives a more muscular and dynamic account, and the revisions can only account for part of the difference, given Weinberger’s generally more reticent take on Reger’s music. Particularly attractive in Weinberger’s account is the Fugue theme, which has a jerky rubato rhythm that surprises the ear at every entry.

Packaging and documentation are up to CPO’s usual standards, with an informative and well-translated liner note from Paul Thissen. The first pages from the manuscripts of opp. 73 and 29 are reproduced, showing Reger’s always elegant musical hand. The consoles of the two organs are also illustrated; the one in Dresden looks like it belongs in the control room at Chernobyl. And, of course, full registration lists are given for both instruments. This isn’t the most dramatic or imposing account of Reger’s music on the market, but Gerhard Weinberger’s attention to detail, and the attractive textures he applies, always make for a satisfying and engaging listening experience.