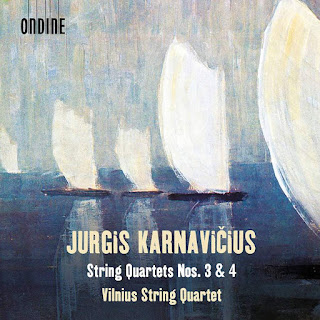 This CD completes a two-disc survey of the string quartets of Lithuanian composer Jurgis Karnavičius (1884–1941) from the long-standing Vilnius String Quartet. Karnavičius is a liminal figure in the history of Lithuanian music. He studied in Russia, before and after the Revolution, but returned to his homeland in 1927. His reputation there is based primarily on the stage works that he composed in the following years, most notably Gražina (1932) and Radvila Perkūnas (1937), which both lay claim to being the founding work of the Lithuanian operatic tradition. But the Lithuanian character of these later works seems to have been a deliberate choice on the composer’s part, and the music of his St Petersburg/Petrograd/Leningrad period is more cosmopolitan in style. The String Quartets Nos. 3 and 4 date from 1922 and 1925 respectively, and demonstrate a surprisingly varied array of influences. Karnavičius had studied at the St Petersburg Conservatory, primarily with Maximilan Steinberg, but also with Lyadov, Rimsky-Korsakov, and Glazunov. Curiously, none of their styles is remotely apparent in these two works, suggesting both a broad exposure to contemporary music from around Europe and a distinctive personal voice that is difficult to pin to any one national style.

The Third String Quartet is dedicated to the memory of Antonio Stradivari, of all people. The swooping phrases of the opening are reminiscent of Delius, but the association doesn’t last long. It soon becomes clear that Karnavičius has a taste for involved counterpoint, and that he is happy to sacrifice the tonal purity of his, generally conservative and tonal, harmonies for the sake of the intricate voice-leading. Both quartets are in three movements, but each is a half hour in duration, so they are substantial works. The liner gives tempo indications for each of the movements, but these are clearly just those at the start of each, and the structure and drama are more sophisticated. In particular, slow, quiet interludes, often involving cello solos, often interpolate the otherwise knotty contrapuntal Allegro sections.

The Fourth Quartet is less contrapuntal than the Third. It has the same austere melodic profile, but this time the melodies are more often heard over sustained pedals and harmonies in the lower strings. The result is more elegiac, but, although pizzicato is used more extensively, the limited timbral palette avoids Impressionistic miasma and locates the style further east in 1920s Europe.

The Vilnius String Quartet have the measure of this music. There playing is as reserved as the melodic writing, too reserved perhaps, and the Third Quartet in particular sounds as if it would benefit from more dramatic weight. The players’ vibrato is narrow and contained. That suits the Fourth Quartet better, and in the second movement, the octave/unison passages are played with impressive unity of intonation. The recorded sound is clear and bright. The players are recorded up close, and the balance is a little top heavy, which ill-suits the contrapuntal equilibrium of the Third Quartet.

The Third Quartet was only published in 1969, though, unlike the Fourth, it does have an opus number (10). The Fourth Quartet has not been published at all, and these are both world premiere recordings. Karnavičius’s later operas seem to have overshadowed his earlier chamber music in Lithuania, which is understandable, given that his later stage works were written in a consciously Lithuanian style, and his earlier chamber music was written in Russia. The Vilnius String Quartet give a convincing presentation of the music, although a more expansive and Romantic approach would be equally warranted. Nevertheless, a welcome introduction to a distinctive and surprisingly unclassifiable musical voice.