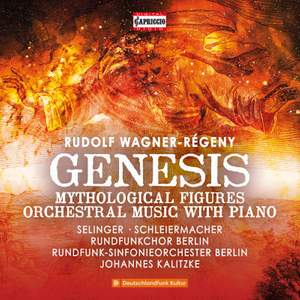 At first glance, this album looks like a compilation of orchestral excerpts from Wagner operas, arranged by one “Régeny.” In fact, it is nothing of the sort, but rather a selection of works by Rudolf Wagner-Régeny (1903–1969), who was one of the leading composers in the first decade of the GDR. That isn’t saying much, but music from East German has had a difficult time in the years since reunification, and politics clearly plays a role in its neglect. Fortunately, the Capriccio label is putting things to rights, and as well as this release, the same conductor and orchestra have also recently released an album of film music by Hanns Eisler (Capriccio C5289).

Wagner-Régeny was born in Transylvania. The “Régeny” was an affectation, designed to both acknowledge his roots and distinguish him from Richard. He studied in Leipzig and Berlin, and spent the war years in the German capital, mostly writing operas, and after the war headed the Hochschulen für Musik in Rostock and then Berlin. Wagner-Régeny enjoyed a prominent position in public musical life under both the Nazis and the Communists, yet remained distant from both, and generally ambivalent about politics. Apparently, his war-era operas (Die Bürger von Calais, 1939, has been released on Myto MCD00285, nla) contained subversive satire of the regime, but so subtle or well-disguised as to avoid censorship. But his GDR-era music—everything here apart from the earlier (1935) Orchestermusik mit Klavier—is particularly interesting as an example of a musical era all but forgotten, a bizarre turn of events, given the rich musical heritage of Saxony and Thuringia.

The main work on the program is the oratorio Genesis (1955–56). The East German authorities were initially reluctant to suppress the Church, especially as the history of Protestantism was so ingrained into the culture of the region. So Wagner-Régeny’s biblical subject was not contentiously dissident. The composer went through a series of stylistic phases, all documented here, but all are characterized by a straightforward linear style and clear, chordal textures with little counterpoint. So, in Genesis, much of the melodic material is derived from chorale melodies, but they are generally presented homophonically by the chorus. There are shades of Carl Orff, especially in the declamatory choral style and percussion rich ensemble writing. The orchestra is small and sparingly used, and a solo piano often serves as accompaniment. The writing for the mezzo soloist is more lyrical and expressive, and Michaela Selinger gives an attractive and engaging performance.

Orchestermusik mit Klavier is basically a piano concerto, its confrontational title designed to evoke Die neue Sachlichkeit. The style here is much like early Neoclassical Stravinsky, but with the simplification of material and treatment taken to an even more extreme level. Melodies are generally scale patterns, and harmonies are clear and orderly. The solo part is well played by Steffen Schleiermacher, who submits to the simplicity of conception and resists the temptation to over-interpret.

The final two works, Mythologische Figuren for orchestra and Fünf Französische Klavierstücke both date from 1951, and both explore serial techniques—yet another surprise from GDR music! It turns out that Wagner-Régeny’s clean, angular approach is well-suited to serialism, which brings a similar sense of order to the melodic lines that the composer instinctively applies to his textures and harmonies. In fact, the serialism of the orchestral work is limited to fragmentary rows, applied as repeating motifs. The “French” piano works apply tone rows more consistently, but again to sparse, sustained harmonies, the result suitably Impressionistic and often just a step removed from Debussy.

Performances here are excellent, although there is little suggestion that this straightforward music posed any challenges to the musicians. The recording was made in the Haus des Rundfunks studio in Berlin, but significant reverb has been added, and the result sounds more like a concert hall. Notes, by Christian Heindl, are in excellent English, and a libretto is included for the oratorio, but only in the sung Latin and German translation.

This review appears in Fanfare issue 45:3.